List of habitats of principal importance in Wales facts for kids

Wales is obliged by law to maintain lists of species and habitats of principal importance for biodiversity conservation; the other countries within the UK: Scotland, England and Northern Ireland, have their own laws for this purpose.

Public bodies, including local authorities now have a legal duty to have regard to conserving biodiversity in the exercise of their normal functions. In Wales, that obligation originally derived from section 42 of the Natural Environment and Rural Communities (NERC) Act 2006. However, this requirement for Wales has since been superseded by an almost identical requirement enshrined within the Environment (Wales) Act 2016.

From these, the formal list just for Wales (and laid out below) now contains 53 of those 65 habitats.

Section 6 of the Environment (Wales) Act 2016 places a legal obligation on public bodies in Wales to 'maintain and enhance biodiversity' whilst carrying out their functions. Section 7 of that Act requires Welsh Ministers to publish and maintain lists of species and types of habitats in Wales that are regarded as of 'principal importance' for the purpose of maintaining and enhancing that biodiversity. This section of the Act replaces the biodiversity duty originally outlined in Section 42 of the NERC Act 2006 for both England and Wales.

Awareness of the presence of any priority habitat or priority species identified on these lists is of importance within the local authority planning process when land is considered for development. Along with legally protected species, as well as statutory and non-statutory sites, knowledge of the presence of priority habitats and priority species is required if the impact of future development is to be avoided or mitigated. Planning Policy Wales indicates that, when determining planning applications, the existence of priority habitats are of greater status than others. By fully considering all these features in the decision-making process, a planning authority will have demonstrated that it has discharged its duty to conserve biodiversity.

Habitats of 'principal importance' in Wales

The list shows the broad habitat group, followed by name of the habitat of 'principal importance'. 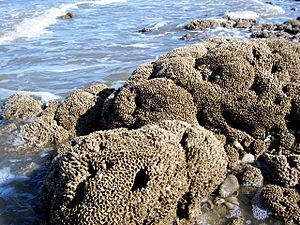 All content from Kiddle encyclopedia articles (including the article images and facts) can be freely used under Attribution-ShareAlike license, unless stated otherwise. Cite this article:
List of habitats of principal importance in Wales Facts for Kids. Kiddle Encyclopedia.