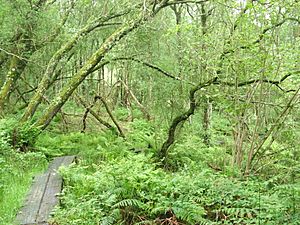 Wet woodland - one of 56 habitats of principal importance for conservation of biodiversity in England. (Firebeacon, Devon) 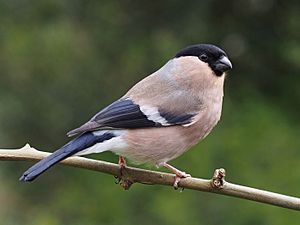 England is obliged by UK law to maintain lists of species and habitats of principal importance for biodiversity conservation; the other countries within the UK: Wales, Scotland and Northern Ireland, have their own laws for this purpose. Public bodies, including local authorities now have a legal duty to have regard to conserving biodiversity in the exercise of their normal functions. In England, this obligation derives from the Natural Environment and Rural Communities (NERC) Act 2006.

The species that have been designated to be of "principal importance for the purpose of conserving biodiversity" are those that are most threatened, in greatest decline, or where the UK holds a significant proportion of the world's total population. They mainly derive from lists originally drawn up for the UK Biodiversity Action Plan (UK BAP). Similarly the list of habitats of principal importance in England also derive from the UK Biodiversity Action Plan. Both lists were reviewed in 2007, and the total number of UK BAP habitats increased from 45 to 65, and the number of UK BAP species increased from under 600 to 1,150.

From these, the formal list just for England (and laid out below) finally contained 56 of those 65 habitats, and 943 of the original 1,150 UK species.

Section 40 of The Natural Environment and Rural Communities (NERC) Act 2006 places a legal obligation on public bodies in England to have regard to particular living organisms and types of habitat which are of the greatest conservation importance whilst carrying out their functions, whilst also having a general regard for protecting all biodiversity. Section 41 of that same Act of Parliament requires the Secretary of State to maintain and publish statutory lists of these features - a function carried out on his/her behalf by Defra and Natural England. The lists given here are sometimes known as the 'Section 41 lists', or 'priority habitats' and 'priority species' lists. They replace an earlier list which was required under Section 74 of the CRoW Act of 2000, and which was published by Defra two years later, though their contents were at that time identical to the UK BAP priority habitats and species lists.

Awareness of the presence of any principal species or principal habitat identified on these lists is of great importance within the local authority planning process when land is considered for development. Along with legally protected species, statutory and non-statutory sites, knowledge of their presence is required if the impact of future development is to be avoided or mitigated. By fully considering all these features in the decision-making process, the planning authority will have demonstrated that it has discharged its duties to conserve biodiversity.

Habitats of 'principal importance' in England

The latest update to the list of Section 41 habitats of principal importance (priority habitats) was published by Natural England in August 2010.

The list shows the broad habitat group, followed by name of the habitat of principal importance (as used by original source).

Species of 'principal importance' in England

The latest update to the Section 41 list of species of principal importance for the conservation of biodiversity in England (priority species) was published by Natural England in May 2014. It now includes 943 species.

All content from Kiddle encyclopedia articles (including the article images and facts) can be freely used under Attribution-ShareAlike license, unless stated otherwise. Cite this article:
List of species and habitats of principal importance in England Facts for Kids. Kiddle Encyclopedia.