The mole crickets are the family Gryllotalpidae, of broad insects about 3–5 cm (1-2 inches) long, with large eyes and shovel-like forelimbs for burrowing and swimming.

Mole crickets vary in size and appearance, but most of them are of moderate size for an insect, typically between 3.2 and 3.5 cm (1.3 and 1.4 in) long as adults. They are adapted for underground life and are cylindrical in shape and covered with fine, dense hairs. The head, fore limbs, and prothorax are heavily sclerotinised, but the abdomen is rather soft. The head bears two threadlike antennae and a pair of beady eyes. The two pairs of wings are folded flat over the abdomen; in most species, the fore wings are short and rounded and the hind wings are membranous and reach or exceed the tip of the abdomen; however, in some species, the hind wings are reduced in size and the insect is unable to fly. The fore legs are flattened for digging, but the hind legs are shaped somewhat like the legs of a true cricket; however, these limbs are more adapted for pushing soil, rather than leaping, which they do rarely and poorly. The nymphs resemble the adults apart from the absence of wings and genitalia; the wing pads become larger after each successive moult.

Adults of most species of mole cricket can fly powerfully, if not with agility, but males do so infrequently. The females typically take wing soon after sunset, and are attracted to areas where males are calling, which they do for about an hour after sunset. This may be to mate, or they may be influenced by the suitability of the habitat for egg-laying, as demonstrated by the number of males present and calling in the vicinity. 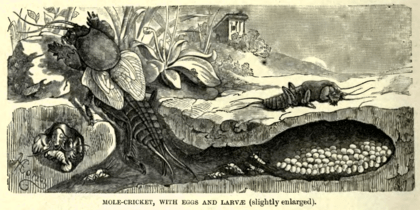 Mole crickets undergo incomplete metamorphosis; when nymphs hatch from eggs, they increasingly resemble the adult form as they grow and pass through a series of up to 10 moults. After mating, a period of one or two weeks may occur before the female starts laying eggs. She burrows into the soil to a depth of 30 cm (12 in), (72 cm (28 in) has been seen in the laboratory), and lays a clutch of 25 to 60 eggs. Neoscapteriscus females then retire, sealing the entrance passage, but in Gryllotalpa and Neocurtilla species, the female has been observed to remain in an adjoining chamber to tend the clutch. Further clutches may follow over several months, according to species. Eggs need to be laid in moist ground, and many nymphs die because of insufficient moisture in the soil. The eggs hatch in a few weeks, and as they grow, the nymphs consume a great deal of plant material either underground or on the surface. The adults of some species of mole cricket may move as far as 8 km (5.0 mi) during the breeding season. Mole crickets are active most of the year, but overwinter as nymphs or adults in cooler climates, resuming activity in the spring. 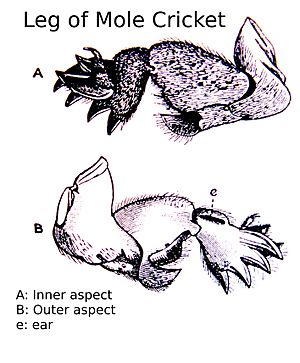 Mole crickets live almost entirely below ground, digging tunnels of different kinds for the major functions of life, including feeding, escape from predators, attracting a mate (by singing), mating, and raising of young.

Their main tunnels are used for feeding and for escape; they can dig themselves underground very rapidly, and can move along existing tunnels at high speed both forwards and backwards. Their digging technique is to force the soil to either side with their powerful, shovel-like fore limbs, which are broad, flattened, toothed and heavily sclerotised (the cuticle is hardened and darkened).

Males attract mates by constructing specially shaped tunnels in which they sing. Mating takes place in the male's burrow; the male may widen a tunnel to make room for the female to mount, though in some species, mating is tail-to-tail. Females lay their eggs either in their normal burrows or in specially dug brood chambers which are sealed when complete in the case of the genus Neoscapteriscus or not sealed in the case of genera Gryllotalpa and Neocurtilla. 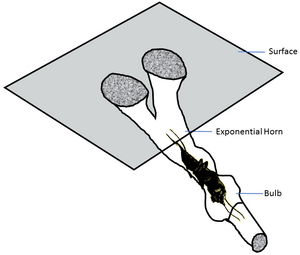 Male mole cricket in singing position in burrow: The burrow is shaped as a double exponential horn with bulb, forming an effective resonator.

Male mole crickets sing by stridulating, always underground. In Gryllotalpa gryllotalpa the song is based on an almost pure tone at 3.5 kilohertz, loud enough to make the ground vibrate 20 cm all round the burrow; in fact, the song is unique in each species. In Gryllotalpa gryllotalpa, the burrow is somewhat roughly sculpted; in Gryllotalpa vineae, the burrow is smooth and carefully shaped, with no irregularities larger than 1 mm. In both species, the burrow has twin openings at the soil surface; at the other end is a constriction, then a resonating bulb, and then an escape tunnel. A burrow is used for at least a week. The male positions himself head down with his head in the bulb, his tail near the fork in the tunnel.

Mole crickets stridulate like other crickets by scraping the rear edge of the left fore wing, which forms a plectrum, against the lower surface of the right fore wing, which has a ratchet-like series of asymmetric teeth; the more acute edges face backwards, as do those of the plectrum. The plectrum can move forward with little resistance, but moving it backwards makes it catch each tooth, setting up a vibration in both wings. The sound-producing stroke is the raising (levation) of the wings. The resulting song resembles the result of modulating a pure tone with a 66-Hz wave to form regular chirps. In G. vineae, the wing levator muscle, which weighs 50 mg, can deliver 3.5 milliwatts of mechanical power; G. gryllotalpa can deliver about 1 milliwatt. G. vineae produces an exceptionally loud song from half an hour after sunset, continuing for an hour; it can be heard up to 600 m away. At a distance of 1 m from the burrow, the sound has a mean power over the stridulation cycle up to 88 decibels; the loudest recorded peak power was about 92 decibels; at the mouths of the burrow, the sound reaches around 115 decibels. G. gryllotalpa can deliver a peak sound pressure of 72 decibels and a mean of about 66 decibels. The throat of the horn appears to be tuned (offering low inductive reactance), making the burrow radiate sound efficiently; the efficiency increases when the burrow is wet and absorbs less sound. Mole crickets are the only insects that construct a sound-producing apparatus. Given the known sensitivity of a cricket's hearing (60 decibels), a night-flying G. vineae female should be able to detect the male's song at a range of 30 m; this compares to about 5 m for a typical Gryllus cricket that does not construct a burrow.

The loudness of the song is correlated with the size of the male and the quality of the habitat, both indicators of male attractiveness. The loudest males may attract 20 females in one evening, when a quieter male may attract none. This behaviour enables acoustic trapping; females can be trapped in large numbers by broadcasting a male's song very loudly.

Mole crickets vary in their diets; some like the tawny mole cricket are herbivores, others are omnivores, feeding on larvae, worms, roots, and grasses, and others like the southern mole cricket are mainly predacious. They leave their burrows at night to forage for leaves and stems, which they drag underground before consumption, as well as consuming roots underground.

All content from Kiddle encyclopedia articles (including the article images and facts) can be freely used under Attribution-ShareAlike license, unless stated otherwise. Cite this article:
Mole cricket Facts for Kids. Kiddle Encyclopedia.