List of historic properties in Goldfield, Arizona facts for kids 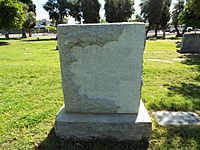 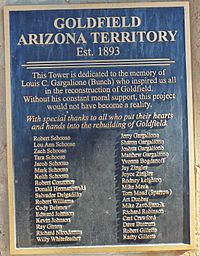 This is a list of historic properties in the mining town of Goldfield, Arizona, a ghost town. The list includes a photographic gallery of some of the town's historic structures which were either restored or rebuilt. The town was founded in 1893, after the discovery of gold in the surrounding area of the Superstition Mountains. The town was abandoned twice by its residents, after the mine veins faulted. The land where the town is located was purchased by a private investor and is now a tourist attraction. Goldfield's Superstition Narrow Gauge Railroad is the only 3 ft (914 mm) narrow-gauge railroad in operation in Arizona. Other attractions include re-enactments of gunfights on the Main Street of the town.

Collin Hakes, Riley Morse and Orlando and Orin Merrill were the first to discover gold in the Goldfield area of the Superstition Mountains. Soon thereafter, prospectors came to the area in search of gold. In 1893, the mining town, which became known as Goldfield, was founded next to the Superstition Mountain in what was then the Arizona Territory. The town, in its heyday, reached a population of about 4000 residents. It had a hotel, general store, post office, church and school. The Goldfield Post Office was established on October 7, 1893. When the mine vein faulted in 1897, the grade of ore dropped leaving the miners without a job. The town began to suffer since its economy depended heavily on the earnings of the miners who moved out. It was not long before the rest of the towns residents relocated to other areas leaving Goldfield a ghost town. The Goldfield post office was discontinued on November 2, 1898.

In 1910, several mines were opened nearby with the installation of a mill and cyanide plant. A small community called Youngsberg evolved around the ghost town. The town was named after George U. Young, secretary of Arizona and acting governor at the time. Young was interested in the development of the mining industry of the area. He became President and general manager of the Madizelle Mining Company and Young Mines Company, Ltd. However, the mines faulted again and by 1926, the town was once again deserted.

Robert F. "Bob” Schoose was born in River Grove, Illinois and moved to California with his family at a young age. He heard of the old site of Goldfield and moved to the town of Mesa, Arizona. In 1984, Schoose and his wife Lou Ann, purchased the location of the Goldfield Mill and decided to rebuild and restore the buildings of the old town with the help of various friends whose names are inscribed in a plaque on the tower which leads to the town. Schoose incorporated the town as the "GOLDFIELD, GHOST TOWN AND MINE TOURS, INC." He serves as President, his wife as Secretary/Treasurer and Jay Zingler as Vice-President.

The town and its historic buildings were revived as a tourist attraction. The town has the only 3 ft (914 mm) narrow gauge railroad in operation in Arizona. It also has numerous shops and buildings which include a bakery, leather works, a jail, livery, and more. There is also a reenactment of a western shootout in the Main Street of the town. The ghost town is located at 4650 N, Mammoth Mine Road within the jurisdiction of Apache Junction, Arizona.

The following photographs are of some of the historic structures in Goldfield.

The following photographs are of a gunfight reenactment by the Goldfield Gunfighters in Goldfield.

All content from Kiddle encyclopedia articles (including the article images and facts) can be freely used under Attribution-ShareAlike license, unless stated otherwise. Cite this article:
List of historic properties in Goldfield, Arizona Facts for Kids. Kiddle Encyclopedia.