List of tallest buildings in Greater Sudbury facts for kids 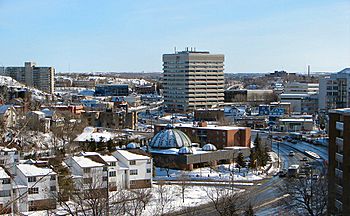 This list ranks buildings in Greater Sudbury that stand at least 30 m (98.4 ft) tall, based on CTBUH height measurement standards. This includes spires and architectural details but does not include antenna masts. 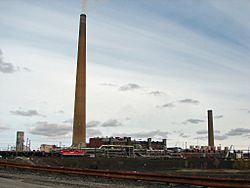 The Inco Superstack at the Inco Copper Cliff smelter.

The structure was built to disperse sulphur gases and other byproducts of the smelting process away from the city itself. As a result, these gases can be detected in the atmosphere around Greater Sudbury in a 240 kilometers (150 mi) radius of the Inco plant. Prior to the construction of the Superstack, the waste gases contributed to severe local ecological damage.

In 2018, Vale announced that the stack will be decommissioned and dismantled beginning in 2020. 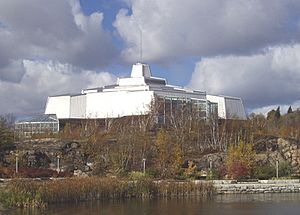 The complex, which is Northern Ontario's most popular tourist attraction, consists of two snowflake-shaped buildings on the southwestern shore of Lake Ramsey, just south of the city's downtown core, as well as a former ice hockey arena which includes the complex's entrance and an IMAX theatre. The snowflake buildings are connected by a rock tunnel, which passes through a billion-year-old geologic fault. This fault line was not known to be under the complex during the construction of the building in the early 1980s. Where the walkway reaches the larger snowflake, the Inco Cavern auditorium is frequently used for temporary exhibits, as well as for press conferences and other gala events.

All content from Kiddle encyclopedia articles (including the article images and facts) can be freely used under Attribution-ShareAlike license, unless stated otherwise. Cite this article:
List of tallest buildings in Greater Sudbury Facts for Kids. Kiddle Encyclopedia.