List of tallest buildings in Mobile, Alabama facts for kids 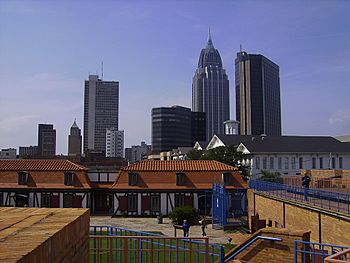 Skyline of Mobile from Fort Conde

The U.S. city of Mobile, Alabama is the site of 15 high-rises, all of which stand taller than 100 feet (30 m). The tallest building in the city is the 35-story RSA Battle House Tower, completed in 2007, which is 745 feet (227 m) tall. The tower is also the tallest building in the U.S. state of Alabama and the 62nd tallest in the United States. Mobile's second-tallest skyscraper, the RSA Trustmark Building, rises 424 feet (129 m) and stood as the tallest structure in the city for over forty years. Overall, four of the ten tallest buildings in Alabama are located in Mobile. The city has more skyscrapers than any other city in Alabama besides Birmingham.

As of August 2009, there are no high-rises under construction or proposed for construction in Mobile. A residential condominium project, Water Street Landing, was originally proposed in 2007 as a three-tower complex to be constructed on the Mobile River; the $45 million (USD) development was later canceled due to lack of funding. While the city of Mobile itself is not the location of any new high-rise developments, Orange Beach, a satellite city in the Mobile–Daphne–Fairhope combined statistical area, is the site of several construction proposals. One such proposal is the Mandalay Beach development, which includes two-twin residential towers that are planned to rise 374 feet (114 m) and 36 stories each.

This lists ranks Mobile high-rises that stand at least 100 feet (30 m) tall, based on standard height measurement. This includes spires and architectural details but does not include antenna masts. An equal sign (=) following a rank indicates the same height between two or more buildings. The "Year" column indicates the year in which a building was completed.

This table lists buildings that once held the title of tallest building in Mobile as well as the current titleholder, the RSA Battle House Tower.

All content from Kiddle encyclopedia articles (including the article images and facts) can be freely used under Attribution-ShareAlike license, unless stated otherwise. Cite this article:
List of tallest buildings in Mobile, Alabama Facts for Kids. Kiddle Encyclopedia.