List of tallest buildings in Oakland, California facts for kids 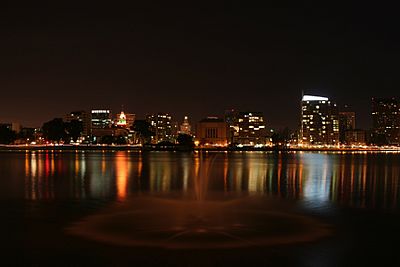 The U.S. city of Oakland, California is the site of more than 95 high-rises, the majority of which are located in its downtown district. In the city, there are 30 buildings taller than 200 feet (61 m). The tallest building is the 28-story Ordway Building, which rises 404 feet (123 m).

Panorama of Oakland's skyline (Some buildings are identifiable using the cursor)

This lists ranks Oakland buildings that stand at least 200 feet (61 m) tall, based on standard height measurement. This includes spires and architectural details but does not include antenna masts. Existing structures are included for ranking purposes based on present height. An equal sign (=) following a rank indicates the same height between two or more buildings. Table entries with dashes (—) indicate that information regarding building is not known. The "Year" column indicates the year in which a building was completed or opened.

All content from Kiddle encyclopedia articles (including the article images and facts) can be freely used under Attribution-ShareAlike license, unless stated otherwise. Cite this article:
List of tallest buildings in Oakland, California Facts for Kids. Kiddle Encyclopedia.