List of tallest buildings in Saskatoon facts for kids 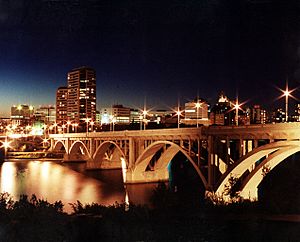 Saskatoon skyline seen from across the South Saskatchewan River

Saskatoon is the largest city in Saskatchewan, Canada. In Saskatoon, there are ten buildings that stand taller than 70 m (230 ft). The tallest building in the city is the Nutrien Tower at 88.5 m (290 ft). The second-tallest is the 24-storey, 79.2-metre (260 ft) La Renaissance Apartments. The third-tallest building in the city is the Hallmark Place, standing at 78.8 m (259 ft) tall with 27 storeys.

The Saskatoon skyline can be photographed from various angles; since the Delta Bessborough is one of the most distinct buildings it is common to photograph the skyline from the east shore of the South Saskatchewan River centered on the Bessborough. 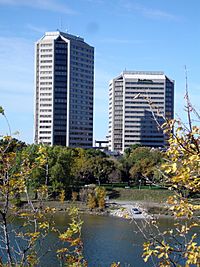 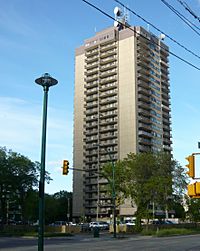 This list ranks buildings in Saskatoon that stand at least 48 m (157 ft) tall, based on CTBUH height measurement standards. This includes spires and architectural details but does not include antenna masts. 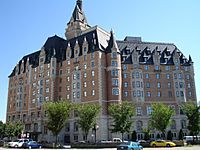 The Delta Bessborough, the tallest building in the city until 1966

This lists skyscrapers that are under construction, approved or proposed in Saskatoon, but are not yet completed structures.

All content from Kiddle encyclopedia articles (including the article images and facts) can be freely used under Attribution-ShareAlike license, unless stated otherwise. Cite this article:
List of tallest buildings in Saskatoon Facts for Kids. Kiddle Encyclopedia.