List of tallest buildings in Canada facts for kids 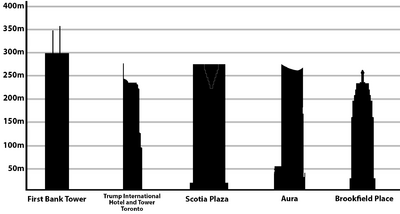 Tallest extant buildings in Canada, all of which are found in Toronto (note: Trump Hotel is now known as The St. Regis Toronto)

Five of Canada's ten largest cities enforce height restriction laws. In Ottawa, skyscrapers could not be built above the height of the Peace Tower until the late 1970s, when the restriction was changed so that no building could overwhelm the skyline. In Montreal, skyscrapers cannot be built above the elevation of Mount Royal. The City of Vancouver has enacted "view corridors" which limit the height of buildings in most areas of downtown. The City of Edmonton had an elevation restriction, approximately 150 m (492 ft) above downtown, due to the proximity of the city centre airport, until it closed in November 2013.

This list does not include towers, including the CN Tower in Toronto, as they are not technically considered to be buildings.

Buildings are ranked according to their height to architectural top, as provided by the Council on Tall Buildings and Urban Habitat (CTBUH). Click a column header to sort the table in a different way. All sources are up to date as of April 2013. To qualify for this table, a building must be quoted by a reliable source as having an official height of more than 150 metres.

This table lists buildings in Canada that were demolished or destroyed and at one time stood at least 60 metres (197 ft) in height.

Timeline of the tallest buildings in Canada

In the 20th century, only three cities have been the site of each sequential tallest building in Canada – Montreal, Toronto, and Quebec City.

This list ranks Canadian cities with buildings that stand at least 60 m (197 ft) tall, based on standard height measurement. This includes spires and architectural details but does not include antenna masts.

All content from Kiddle encyclopedia articles (including the article images and facts) can be freely used under Attribution-ShareAlike license, unless stated otherwise. Cite this article:
List of tallest buildings in Canada Facts for Kids. Kiddle Encyclopedia.