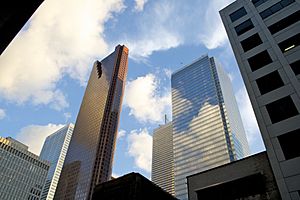 Bay Adelaide West in Toronto's Financial District in 2009, prior to the construction of Bay Adelaide East

Bay Adelaide West in 2009, with the facades of the 1926 National Building visible towards the base of the tower

Upon completion, the Bay Adelaide Centre will consist of three towers.

The second tower, Bay Adelaide East, has a floor area of 91,045 square metres (980,000 sq ft) and a height of 44 storeys. Located mid-block between Adelaide Street West and Temperance Street, the tower has a 6-storey podium extending to the northwest corner of Yonge Street and Adelaide Street West.

The future Bay Adelaide North is anticipated to have a floor area of approximately 46,450 square metres (500,000 sq ft) and a height of 28 to 32 storeys. Unlike the two other towers in the complex, the north tower will be located on the north side of Temperance Street, with frontage along Richmond Street West. The Bay Adelaide North site is currently occupied by a one-storey elevator lobby which provides access to the underground concourse and garage.

The complex's mechanical facilities are located in a four-storey above-grade building on the southwest corner of Yonge and Temperance Streets, with retail uses to be constructed at grade as part of the Bay Adelaide East construction. In order to accommodate the construction of the Bay Adelaide East podium, the historic facades of the former Elgin Block, constructed in 1850 and 1910 and once occupied by Holt Renfrew, were disassembled, refurbished and reconstructed as the facade of the mechanical facility building.

Both Bay Adelaide West and Bay Adelaide East are designed in a modernist style, although the historic north and west facades of the former National Building at the corner of Bay and Temperance Streets, completed in 1926, has been incorporated into Bay Adelaide West. 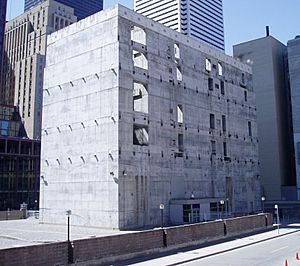 The first tower development on the site was a joint project by Markborough Properties and TrizecHahn: a 57-storey office tower to be constructed at the corner of Bay and Adelaide Streets. It was to have cost almost a billion dollars, and was the last of a series of construction projects in downtown Toronto launched in the boom years of the 1980s, when a number of massive towers were built nearby, such as Scotia Plaza.

The building caused considerable controversy among those opposed to the erection of such massive structures. The tower would have stood far higher than was allowed by the city's official plan. To gain city hall's approval, the developers committed some $80 million towards new social housing and other projects. A portion of the site was turned over to the city for use as a park that is now Cloud Gardens. Both of these deals went ahead, despite the tower never having been completed.

Construction began in 1990, but the developers soon ran into problems. The economy went into recession and office vacancy rates in Toronto rose to 20%. Construction was halted, and in 1993, with over $500 million already invested, the project was permanently put on hold. All that was completed was the underground parking garage and several storeys of the concrete service shaft that stood from 1991 onwards, as a monument to the failed project in downtown Toronto. The stump of the service shaft was known to security and the locals as "the bunker" or simply "the stump". The parking garage was in operation, and the stump itself was used as a surface on which to mount advertisements.

The exterior of the stump of the building was depicted as a nightclub in the opening scene of the 1996 comedy film Brain Candy.

There were several attempts to revive the project. In 1998 TrizecHahn briefly revived it, but another shift in the economy caused them to again pause. In 2000 there was again talk of reviving the project, but the next year TrizecHahn sold its 50% share to Brookfield Properties for $49 million. Brookfield was committed to completing the structure to a smaller height of either 40 or 50 storeys, but later that year the economy again soured and the project remained on hiatus.

The development achieved LEED (Leadership in Energy and Environmental Design) Gold status for the project's environmental sustainability and will produce an estimated 40% energy savings relative to other buildings. The LEED rating system recognizes leading-edge buildings that incorporate design, construction and operational practices that combine healthy, high-quality and high-performance advantages with reduced environmental impacts.

Bay Adelaide Centre is the first mixed-use, commercial real estate building in North America to launch a mobile app aimed to communicate directly with tenants in the building.

All content from Kiddle encyclopedia articles (including the article images and facts) can be freely used under Attribution-ShareAlike license, unless stated otherwise. Cite this article:
Bay Adelaide Centre Facts for Kids. Kiddle Encyclopedia.