Alexis Nihon Complex (French: Complexe Alexis Nihon) is a 223,000 m2 (2,400,000 sq ft) building complex in Downtown Montreal, Quebec, Canada (on the border with Westmount), consisting of a shopping centre, two office towers, and a residential building. It is named after the inventor and businessman Alexis Nihon. The shopping mall is directly connected to the Atwater metro station, which joins the building by a short tunnel with the adjacent Dawson College, and by a longer one adjoins nearby Westmount Square. The original complex was designed by the Montreal architect Harold Ship, and its architectural plans are housed at the Canadian Centre for Architecture.

On October 26, 1986, a major fire heavily damaged its 16-story office building and is still considered the city's biggest fire in a skyscraper. At least six stories were destroyed in the blaze. In 2002, the service de sécurité incendie de Montréal was heavily blamed for negligence and incompetence according to the Cour d'Appel du Québec. Several tenants including the federal government sued the then-owner of the building for several million dollars.

On April 5, 2017, a minor fire broke out near the roof of the food court. Minor damage occurred as a result.

The block now containing the mall was once the site of Atwater Park, home of the Montreal Royals baseball team through 1927. 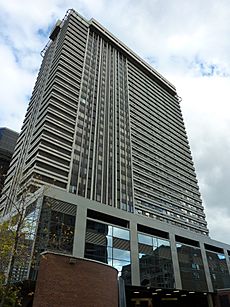 Alexis Nihon, at the corner of Atwater Avenue and Ste-Catherine Street West, is accessible: 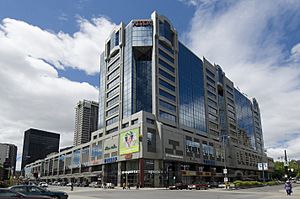 The complex is directly connected to the Atwater Metro station and offers numerous services, a variety of shops and superstores, and a food court with over 25 restaurants. From 1982 until 1986, it housed Montreal's only downtown IKEA Store, which due to a lack of space, moved out to its own building at to boul. Cavendish in Saint-Laurent. Alexis Nihon also previously housed Miracle Mart (later becoming an M-Store, a three-screen cinema operated by Cineplex Odeon, Zellers and Steinberg's supermarket. When the complex first opened in 1966 the French department store Au Printemps opened it first location outside France.

All content from Kiddle encyclopedia articles (including the article images and facts) can be freely used under Attribution-ShareAlike license, unless stated otherwise. Cite this article:
Alexis Nihon Complex Facts for Kids. Kiddle Encyclopedia.