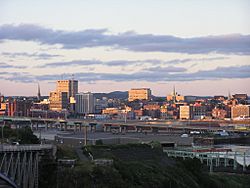 This a list of the tallest buildings in Saint John, New Brunswick. 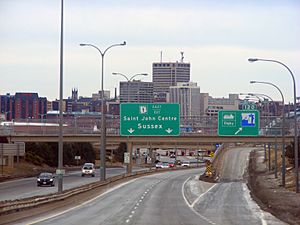 View from the highway

This list ranks buildings in Saint John that stand at least 30 metres (98 ft) tall, based on CTBUH height measurement standards. This includes spires and architectural details but does not include antenna masts.

Tallest under construction and proposed 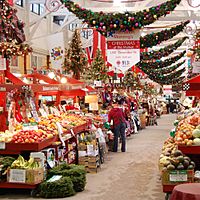 The Saint John City Market is the oldest continuing farmer's market in Canada, with a charter dating from 1785. Located in Saint John, New Brunswick and completed in 1876, the current market building has a unique roof structure that resembles an inverted ship's keel. Made of wooden trusses, the structure was reportedly built by unemployed ship carpenters of the day. Also, the floor slopes with the natural grade of the land. The architecture is in the Second Empire style.

Some of the businesses in the market have been operating continuously there for more than 100 years. Facing onto Kings Square, the market is connected to the city's indoor pedway system.

The market was designated a National Historic Site of Canada in 1986.

The Courtenay Bay Generating Station is a decommissioned oil-fired power plant owned by NB Power. The plant generated 113 megawatts of baseline electricity for the province between 1960 and 2008. In 1998, the plant was considered for conversion to natural gas as the primary fuel source, but this never came to be.

All content from Kiddle encyclopedia articles (including the article images and facts) can be freely used under Attribution-ShareAlike license, unless stated otherwise. Cite this article:
List of tallest buildings in Saint John, New Brunswick Facts for Kids. Kiddle Encyclopedia.