Commerce Court is an office building complex on King and Bay Streets in the financial district of Toronto, Ontario, Canada. The primary tenant is the Canadian Imperial Bank of Commerce (CIBC) which has its headquarters in the building. The four-building complex is a mix of Art Deco, International, and early Modernism architectural styles.

The site initially housed Toronto's first Wesleyan Methodist Church, a small wood chapel surrounded by woods (which later became the Metropolitan United Church) from 1818 to 1831, then as Theatre Royal from 1833 onwards. From 1887 to 1927 it was home to a seven-storey head office of the Canadian Bank of Commerce (CIBC).

The development of Commerce Court began when the seven-storey head office for CIBC was demolished to make way for a new corporate headquarters, Commerce Court North. Upon its completion, the 34-storey limestone Commerce Court Tower was the tallest building in the British Empire/Commonwealth for roughly three decades, until 1962. Other buildings, including Commerce Court West, were added to the complex during the 1970s.

On Wednesday, January 9, 2008, a portion of a CIBC sign at the top of the Commerce Court West building blew off as a result of wind gusts. Police cordoned off the area as a precaution. As a result, Bay St. from Front to Richmond and King St. from York to Yonge were shut down. Toronto Transit Commission (TTC) service was diverted. This took place eight months after a piece of white marble panel fell from the 60th storey of the First Canadian Place building, and ten months after layers of ice fell from the CN Tower.

The Canadian Imperial Bank of Commerce sold the complex in April, 2000, now managed by GWL Realty Advisors, but the head office of the bank remains the anchor tenant. CIBC plans to relocate its headquarters from Commerce Court to CIBC Square after that complex is completed. However, the bank intends to maintain a presence at Commerce Court.

Commerce Court is a commercial complex made up of four structures, and a central courtyard. The complex is bounded by several major roadways, including Bay Street to the west, King Street West to the north, Yonge Street along its southeastern periphery, and Wellington Street West to the south. The structures are connected to the PATH network, a series of underground pedestrian tunnels that connect downtown Toronto.

The first building, now known as Commerce Court North, was opened in 1931 as the headquarters of the Canadian Bank of Commerce, a precursor bank to the current main tenant. The Canadian Bank of Commerce head office (now Commerce Court North) was designed by the American bank specialists York and Sawyer with the notable Canadian firm Darling and Pearson as the local architects of record. Structural engineering was provided by Harkness and Hertzberg. At the time of its construction, the building was one of the most opulent corporate headquarters in Canada, and featured a public observation deck (since closed to the public for safety and liability concerns).

Commerce Court East (1972: 13 storeys) and Commerce Court South (5 storeys) are glass and applied masonry structures also designed by Pei Cobb Freed & Partners with Page and Steele in 1972. In 1994, Zeidler Partnership Architects was commissioned to renovate the Commerce Court urban plaza, the banking area at the base of Commerce Court West, and the below-grade retail area. There are 65 retails shops in the plaza below the complex. 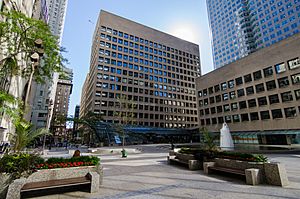 The complex features an outdoor central plaza with a fountain. Commerce Court East (centre) and Commerce Court South (right) are visible in the background.

Surrounding the Commerce Court complex of buildings is a plaza featuring a fountain in its centre, and a three piece bronze sculpture by Derrick Stephan Hudson entitled, Tembo, Mother of Elephants completed in 2002. The sculptures were installed on site in 2005 on loan from the L.L. Odette Foundation of Windsor, Ontario.

In popular culture, the plaza was used as a stand-in for Wall Street in a pair of Kids in the Hall sketches featuring Mr. Tyzik, the Headcrusher.

The Canadian Imperial Bank of Commerce is an anchor tenant for the complex, with the bank housing its headquarters there. However, CIBC has announced plans to relocate its headquarters from Commerce Court to CIBC Square, beginning in 2020, in a move which will also consolidate staff from various other CIBC offices from the Toronto area.

All content from Kiddle encyclopedia articles (including the article images and facts) can be freely used under Attribution-ShareAlike license, unless stated otherwise. Cite this article:
Commerce Court Facts for Kids. Kiddle Encyclopedia.