CIBC Square (known during early stages of development as Bay Park Centre) is an office complex under construction in the South Core neighbourhood of Toronto, Ontario, Canada. The complex, located on Bay Street south of Front Street, is a joint development of Ivanhoé Cambridge and Hines. It will serve as the new global operational headquarters for the Canadian Imperial Bank of Commerce (CIBC), consolidating approximately 15,000 staff from several CIBC-tenanted buildings in the Greater Toronto Area, including its existing headquarters at Commerce Court. The complex also includes the Union Station Bus Terminal constructed on behalf of Metrolinx for GO Transit and other inter-city bus services, connected directly to Union Station. The complex will also include a one acre park elevated over the rail corridor.

The 49 storey south tower (81 Bay Street) will be completed first, built on the site of a parking lot opposite the Scotiabank Arena. This tower includes a bus terminal for regional GO Transit and inter-city bus services which replaced the former terminal on Bay Street. A pedestrian skybridge links the complex to the Scotiabank Arena and Union Station, expanding the PATH walkway system further south below the railway corridor - to the One Yonge Street complex and ultimately to the proposed redevelopments on the LCBO lands farther east. The south tower was scheduled to open in 2020 but it is currently unknown when the south tower will open.

The 50 storey north tower (141 Bay Street) will be built on the site of the former GO Transit bus terminal, located behind the Dominion Public Building. The north tower is scheduled to be completed in 2024. Below the two towers will be a four-storey podium housing retail space, including a flagship CIBC retail bank branch.

At fourth floor level, the two towers will be connected to each other by a one acre, publicly accessible park, elevated over the railway corridor, with varied topography: slopes and hills, horticulture, gardens, shade groves, balconies, and vista areas.

The overall complex was designed by British architects WilkinsonEyre, and Adamson Associates of Toronto. 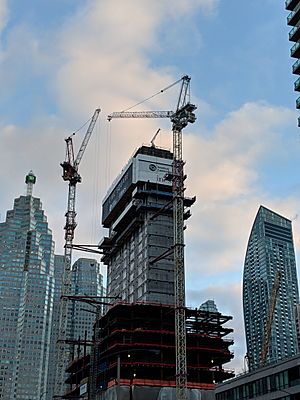 CIBC Square under construction in March 2019.

The development is being co-led by Ivanhoé Cambridge and Hines using land acquired from Metrolinx (as well as city-owned Toronto Parking Authority parking lot), and designed by British architectural firm WilkinsonEyre and Adamson Associates of Toronto. Ivanhoe Cambridge bought 81 Bay Street (formerly 45 Bay Street) back in 2007. Additional land and air rights over the rail corridor were acquired. In September 2014, Ivanhoe agreed with Metrolinx to build the new GO Bus Terminal at 81 Bay Street.

CIBC is the primary tenant of the complex with 1,750,000 square feet (163,000 m2) or 60% of the leasable space. Boston Consulting Group will occupy approximately 85,000 square feet (7,900 m2) for its Canadian headquarters. Microsoft Canada will move into a 132,000 square feet (12,300 m2) facility for its Canadian headquarters at 81 Bay Street. The Union Station Bus Terminal is located in the south tower of the new complex and replaced the previous bus terminal on the site where the north tower is to be built. Unknown is the fate of the former CP Express & Transport Building dock door and limestone fascia, which was incorporated in the current bus terminal as it will be replaced by the tower at 141 Bay Street.

All content from Kiddle encyclopedia articles (including the article images and facts) can be freely used under Attribution-ShareAlike license, unless stated otherwise. Cite this article:
CIBC Square Facts for Kids. Kiddle Encyclopedia.