Absolute World is a residential condominium twin tower skyscraper complex in the five tower Absolute City Centre development in Mississauga, Ontario, Canada. The project was built by Fernbrook Homes and Cityzen Development Group. With the first three towers completed (Absolute City Centre 1 and 2 and Absolute Vision), the last two towers (Absolute World 4 and 5) were topped off at 50 and 56 storeys.

In 2004, an international design competition was held to select the architect for the fourth tower for Absolute World. Yansong Ma, founder of the MAD office, Beijing/China architectural design firm was announced the winner. Sales were to start in May 2007 with construction beginning later that year, and anticipated completion in 2009. Within days of the announcement, the taller building had been nicknamed the "Marilyn Monroe" tower due to its curvaceous, hourglass figure likened to actress Marilyn Monroe. Burka Varacalli Architects, a Toronto firm, was hired as MAD's local partner in April 2007.

On June 14, 2012, the Chicago-based Council on Tall Buildings and Urban Habitat (CTBUH), a non-profit group of architects and engineers, reported that the towers were among the world's best new skyscrapers. The building would also win the Emporis Skyscraper Award in 2012. 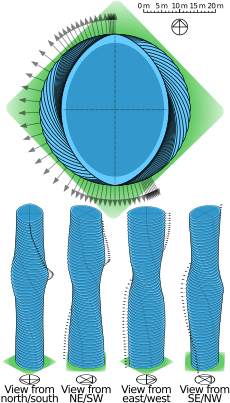 Simplified plan and massing model of Tower 1 of Absolute World

The larger of the two towers twists 209 degrees from the base to the top, making it very similar to Turning Torso in Malmö, Sweden. The structural design was done by Sigmund Soudack & Associates Inc, a Toronto-based structural engineering firm. The tower has six levels of underground parking.

The following table lists the amount of rotation for each floor of Tower 1.

All content from Kiddle encyclopedia articles (including the article images and facts) can be freely used under Attribution-ShareAlike license, unless stated otherwise. Cite this article:
Absolute World Facts for Kids. Kiddle Encyclopedia.