Aura is a mixed-use skyscraper completed in 2014 in Toronto, Ontario, Canada. It is the final phase of a series of condominium buildings near College Park in Toronto's Downtown Yonge district. It is part of the Residences of College Park project. Construction lasted from 2010 to 2014. With 79 floors, as of 2018 it is the tallest residential building in Canada and the 34th tallest residential building in the world. 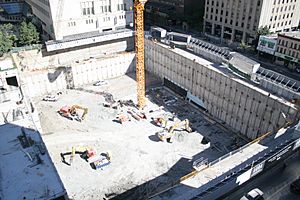 The excavated site in September 2010

The original design proposed two towers. The building would have featured a ten-storey podium, with two towers on top. The taller tower would have been (including podium) 60 storeys and 196.5 m tall. The shorter tower (including podium) would have been 20 stories and 74.5 m tall. In February 2012, Toronto city council approved a three-storey increase to 78 floors, meaning that Aura is Canada's tallest residential building.

The lower floors of the building were occupied while the upper floors were still being constructed. Floors 1-31 were opened for occupancy in Fall 2013, while floors 32-80 were still bare concrete. The second set of floors, 32 to 57, were occupied in spring 2014. The final phase, floors 58-80, were expected to be completed in December 2014.

On August 2, 2016, several residents - including members of the condo board - went public to describe the unreliable condition of the elevators. At this time only one elevator served all floors above the 50th. Many residents on the upper floors were not able to rely on the elevators to exit the building, and believed that design flaws did not account for passenger demand. Property management blamed flooding for the outages.

On January 25, 2020, the residents of the Aura condominium were notified that all water would be shut off for seven weeks. Cold water was restored the next day. Property management blamed the city's water main and requested residents to find "alternative accommodations". It was later demonstrated that several pumps had failed inside the building.

The building features lighting installed on the top floors, visible across most of the city. This lighting, although discussed with city planners, was unexpectedly bright when installed. This resulted in a deadly impact on migratory birds. The city later negotiated with the developers to turn off the lights after 10:30PM during the fall migration season.

The building has a shared patio on the 5th floor and a 40,000 square-foot fitness facility. There is fast food court in the basement level of the building with space for 12 vendors. In 2015, the popular Toronto-based website BlogTO described Shops at Aura as "Toronto's Worst Mall". This was largely in reaction to the half-vacant retail space, limited offerings at the food court, and atmosphere. As of 2016, only three of the 12 fast food units were occupied.

The complex is not connected to the PATH system. City staff have indicated the connection with PATH may be years away. In 2016, unit owners started a lawsuit against the developer for misrepresentation, breach of contract and construction deficiencies. As of 2016, only 50 of the 250 retail units were occupied.

All content from Kiddle encyclopedia articles (including the article images and facts) can be freely used under Attribution-ShareAlike license, unless stated otherwise. Cite this article:
Aura (Toronto) Facts for Kids. Kiddle Encyclopedia.