List of tallest buildings in Winnipeg facts for kids 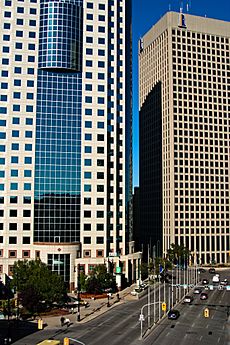 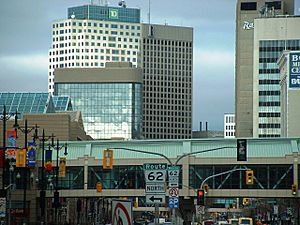 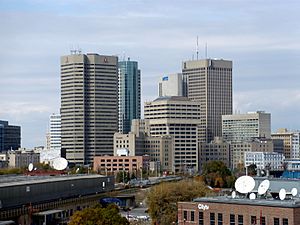 Downtown buildings as seen from The Forks, Winnipeg 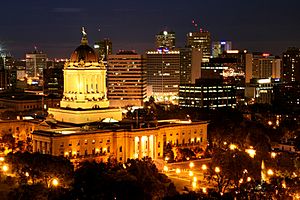 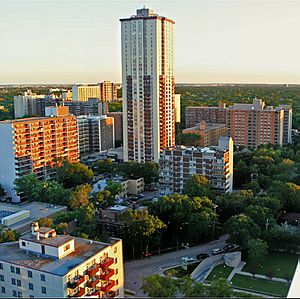 Winnipeg is the capital and largest city in Manitoba, Canada. Winnipeg has 6 buildings that stand taller than 100 m (328 ft).

Winnipeg's history of towers began with the Union Bank Tower (1904), the National Bank Building (1911), and the Hotel Fort Garry in 1913. Buildings in the city remained relatively short in the city until the late 1960s when the city experienced its first skyscraper boom, with the construction of the Richardson Building, Holiday Towers, and Grain Exchange Tower all being constructed during this time. From 1980 to 1990, Winnipeg witnessed a major expansion of skyscraper and high-rise construction. Many of the city's office towers were completed during this period, such as Canwest Place and the Evergreen Place towers. A twenty-year lull in building construction came after this expansion, though Winnipeg has experienced a much smaller second building expansion beginning in the late 2000s and continuing into the present.

This list ranks buildings in Winnipeg that stand at least 60 m (197 ft) tall, based on CTBUH height measurement standards. This includes spires and architectural details but does not include antenna masts.

This is a list of projects over 35 m (115 ft) that are under construction, approved, on-hold and proposed in the city of Winnipeg.

All content from Kiddle encyclopedia articles (including the article images and facts) can be freely used under Attribution-ShareAlike license, unless stated otherwise. Cite this article:
List of tallest buildings in Winnipeg Facts for Kids. Kiddle Encyclopedia.