The Canadian Museum for Human Rights (CMHR) is a Canadian Crown Corporation and national museum located in Winnipeg, Manitoba, adjacent to The Forks. The purpose of the museum is to "explore the subject of human rights with a special but not exclusive reference to Canada, to enhance the public's understanding of human rights, to promote respect for others and to encourage reflection and dialogue." It held its opening ceremonies on 19 September 2014. 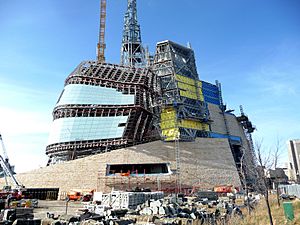 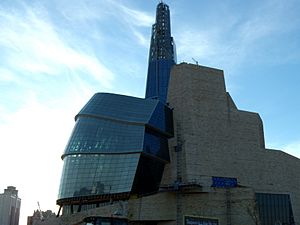 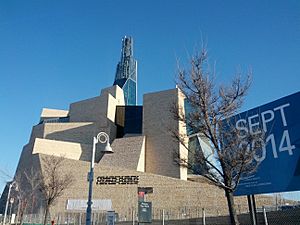 On 17 April 2003, the 21st anniversary of the signing of Canada's Charter of Rights and Freedoms, the establishment of the Canadian Museum for Human Rights was announced as a joint partnership of the Asper Foundation, the Government of Canada, the Province of Manitoba, the City of Winnipeg and The Forks North Portage Partnership. The Asper Foundation donated $20 million.

Israel Harold Asper, OC OM QC, known as Izzy Asper, is credited with the idea and vision to establish the CMHR. He was a Canadian lawyer, politician, and founder of the now-defunct media conglomerate Canwest Global Communications. Asper hoped it would become a place where students from across Canada could come to learn about human rights. He also saw it as an opportunity to revitalize downtown Winnipeg and increase tourism to the city, as well as to raise understanding and awareness of human rights, promote respect for others, and encourage reflection, dialogue, and action. After Izzy's death in 2003, his daughter Gail Asper spearheaded the project.

On 20 April 2007, Prime Minister Stephen Harper announced the Government of Canada's intention to make the CMHR into a national museum. On 13 March 2008, Bill C-42, an Act amending the Museums Act and making consequential amendments to other Acts, received Royal Assent in Parliament, with support from all political parties, creating the Canadian Museum for Human Rights as a national museum. By the middle of 2008, a government-funded opinion research project had been completed by the TNS/The Antima Group. The ensuing report—based primarily on focus group participants—listed the following: which the CMHR might cover topics (not in order of preference); key milestones in human rights achievements, both in Canada and throughout the word; current debates about human rights; and events where Canada showed a betrayal or a commitment to human rights.

19 December 2008 marked the groundbreaking ceremony at the site of the CMHR, and official construction on the site began in April 2009. Construction was initially expected to be completed in 2012. The chair of the board resigned before his term was up, and a new interim chair was appointed. The base building has been substantially complete since the end of 2012, and the Museum's inauguration took place in 2014.

The museum's official opening on 19 September 2014, was protested by several activist groups, who expressed the view that their own human rights histories had been inaccurately depicted or excluded from the museum. The First Nations musical group A Tribe Called Red, who had been scheduled to perform at the opening ceremony, pulled out in protest against the museum's coverage of First Nations issues.

Funding for the capital costs of the CMHR is coming from three jurisdictions of government, the federal Crown, the provincial Crown, and the City of Winnipeg, as well as private donations. The total budget for the building of the exterior of the CMHR and its contents was $310 million as of February 2011. At the time of its opening in September 2014, the cost of the museum was approximately $351 million.

To date, the Government of Canada has allocated $100 million, the Government of Manitoba has donated $40 million, and the City of Winnipeg has donated $20 million. The Friends of the Canadian Museum for Human Rights, led by Gail Asper, have raised more than $130 million in private donations from across Canada toward a final goal of $150 million. These private sector pledges include $4.5 million from provincial crown corporations in Manitoba and $5 million from the government of Ontario. The Canadian Museum for Human Rights has requested an additional $35 million in capital funding from the federal government to cover shortfalls. In April 2011, the CMHR received an additional $3.6 million from the City of Winnipeg, which was taken from a federal grant to the city in lieu of taxes for the museum.

The CMHR's operating budget is provided by the government of Canada, as the CMHR is a national museum. The estimated operating costs to the federal government are $22 million annually. In December 2011, the CMHR announced that due to rising costs for the interior exhibits of the museum, the total construction cost had increased by an additional $41 million to a new total of $351 million. In July 2012, the federal and provincial governments agreed to further enhance the capital funding to the CMHR by up to $70 million, through a combination of a federal loan and a provincial loan guarantee. This newest funding was essential for the completion of the interior exhibits so that the museum could officially open in 2014, already two years behind schedule. 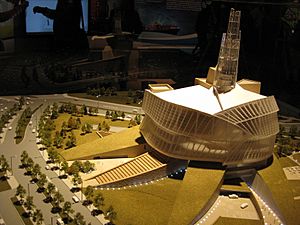 Architectural model of the Canadian Museum for Human Rights

In 2003, the Friends of the Canadian Museum for Human Rights launched an international architectural competition for the design of the CMHR. 100 submissions from 21 countries worldwide were submitted. The judging panel chose the design submitted by Antoine Predock and Chris Beccone, architects from Albuquerque, New Mexico.

His vision for the CMHR is a journey, beginning with a descent into the earth where visitors enter the CMHR through the "roots" of the museum. Visitors are led through the Great Hall, then a series of vast spaces and ramps, before culminating in the Tower of Hope, a tall spire protruding from the CMHR that provides visitors with views of downtown Winnipeg. He has been quoted as saying: "I'm often asked what my favorite, my most important building is," he said. "I'm going on record right now," he proclaimed. 'This is it.'"

Antoine Predock's inspiration for the CMHR came from the natural scenery and open spaces in Canada, including trees, ice, northern lights, First Nations peoples in Canada, and the rootedness of human rights action. He describes the CMHR in the following way:

The Canadian Museum for Human Rights is rooted in humanity, making visible in the architecture the fundamental commonality of humankind-a symbolic apparition of ice, clouds and stone set in a field of sweet grass. Carved into the earth and dissolving into the sky on the Winnipeg horizon, the abstract ephemeral wings of a white dove embrace a mythic stone mountain of 450 million year old Tyndall limestone in the creation of a unifying and timeless landmark for all nations and cultures of the world.

The base building has been substantially complete since the end of 2012. Throughout the foundation work of the CMHR, medicine bags created by elders at Thunderbird House, in Winnipeg, were inserted into the holes made for piles and caissons to show respect for Mother Earth. The CMHR website had two webcams available for the public to watch the construction as it progressed.

For the construction of the Hall of Hope full of illuminated alabaster ramps, more than 3.500m² and 15.000 tiles of alabaster were used, making it the biggest project ever done with alabaster.

On 3 July 2010, Elizabeth II, Queen of Canada, unveiled the building's cornerstone. The stone bears the Queen's royal cypher and has embedded in it a piece of stone from the ruins of St. Mary's Priory, at Runnymede, England, where it is believed the Magna Carta was approved in 1215 by King John.

At the time of its opening in September 2014 there were ten permanent galleries.

The CMHR worked with exhibit designer Ralph Appelbaum Associates (RAA) from New York to develop the inaugural exhibits of the museum. RAA indicated that the galleries throughout the CMHR would deal with various themes including the Canadian human rights journey, Indigenous concepts of human rights, the Holocaust, and current human rights issues. The CMHR's team of researchers working with RAA to develop the inaugural exhibits.

As part of the content development process, the CMHR did a cross-country tour called "Help Write the Story of the Canadian Museum for Human Rights". From May 2009 to February 2010, CMHR researchers visited 19 cities and talked to thousands of people about their human rights experiences and what they wanted to see in the museum. This consultation process was led by Lord Cultural Resources, based in Toronto. On 5 March 2013 a story produced by CBC TV (Manitoba) mentioned a document, "Gallery Profiles" (dated 12 September 2012), that confirms some the CMHR's contents. The Museum's largest gallery is dedicated to Canadian content, while a thematic approach is taken throughout all of its galleries.

Indigenous issues are addressed in each gallery, but are prominent in the " Canadian Journeys Gallery" and the "Indigenous Perspectives Gallery."

Several agreements have been reached by the CMHR and various educational institutions and government agencies, to enhance the quality and depth of information provided by the museum, as well as to broaden the educational opportunities for the museum. This is a tentative and evolving list of organizations that have partnered with the museum:

All content from Kiddle encyclopedia articles (including the article images and facts) can be freely used under Attribution-ShareAlike license, unless stated otherwise. Cite this article:
Canadian Museum for Human Rights Facts for Kids. Kiddle Encyclopedia.