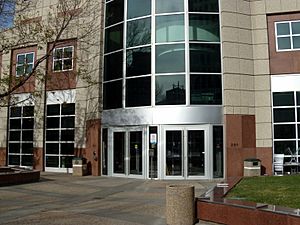 201 Portage (former names: TD Centre, Canwest Place, and CanWest Global Place) is an office tower at the northwest intersection of Portage and Main in Winnipeg, Manitoba, Canada. It is the tallest building in Winnipeg and in the province of Manitoba.

Originally built by the Toronto Dominion Bank, the skyscraper was acquired by Canwest to serve as the company's main corporate headquarters. Global Winnipeg (CKND-DT) moved its operations to 201 Portage on September 1, 2008. Having declared bankruptcy and sold its media properties, Canwest has vacated the premises; its main successor Shaw Media retained only the lease for the 30th floor, where the Global Winnipeg studios are located. On 11 January 2011, the Canwest sign and logo were removed. The penthouse stayed vacant after Canwest's departure in November 2010, until late 2012 when RBC-Dominion Securities relocated to it from the Richardson Building.

Currently, the building is branded as "201 Portage". The building was managed by Creswin Properties, a real-estate company privately owned by the Asper family that owned Canwest, until early 2014. The building was acquired under new ownership in May 2014 and is owned by Portage & Main Development Ltd., a private corporation whose shareholders include 201 Portage Equities Inc. and Harvard Developments Inc.

All content from Kiddle encyclopedia articles (including the article images and facts) can be freely used under Attribution-ShareAlike license, unless stated otherwise. Cite this article:
201 Portage Facts for Kids. Kiddle Encyclopedia.