The Little 500 (also known popularly as the "Little Five"), is a track cycling race held annually during the third weekend of April at Bill Armstrong Stadium on the campus of Indiana University in Bloomington, Indiana. It is attended by more than 25,000 fans each April.

The race was founded in 1951 by Howdy Wilcox Jr., Executive Director of the Indiana University Foundation, who modeled the race after the Indianapolis 500 automotive race, which his father had won in 1919. Racers compete in teams of four, racing relay-style for 200 laps (50 mi (80 km)) along a quarter-mile (440 yd (400 m)) cinder track. Thirty-three teams are selected in qualifications trials to compete in the main race. Money raised by the event goes towards a scholarship fund for working Indiana University students.

Billed as "The World's Greatest College Weekend," the race has expanded into a whole week of activities since its original founding; the Women's Little 500 (100 laps; 25 mi (40 km)) was first held in 1988 and continues to be run each year, and other events such as the Little Fifty Running Relay Race and Alumni Races add to the festivities. During his run for presidency the then senator Barack Obama made an unannounced visit to the Little 500 women's race in 2008. As of 2019[update], the Little 500 has raised a total of more than $2 million in scholarship funds. 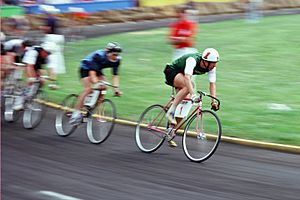 Special rules for the Little 500 race include:

Little 500 bikes are identical, single-speed (46x18), coaster brake racing bicycles with 700c wheels, 32mm tires and flat rubber pedals. The unusual specification originated with the famous AMF Roadmaster bicycles of the 1960s and 1970s, once the sole bicycle type used in the event. There are two different versions of the bike for men and women, with the only difference being frame size. Every year a new version of the specified bicycle type is purchased, with two given to each team. A deposit of $400 must be placed for both bikes. At the end of the season, teams are given the option to keep their race bikes or to return them back to IUSF in exchange for their deposit. Returned former race bikes are kept at the track and rented out to those teams that lack bicycles meeting Little 500 specifications.

Several criteria must be met by a student who desires to participate as a rider in the Little 500:

Following the release of Breaking Away, a real-life Cutters team was formed. Their first race was in 1984, which they won. They are students, who are traditionally either Bloomington locals or at the very least non-Greek , and have been tremendously successful, winning fourteen of the thirty-six races that they have entered, while never finishing worse than 12th.

The Little 500 includes four other series events in addition to the race itself: Qualifications, ITTs, Miss-N-Out, and Team Pursuit. These events are collectively known as "The Spring Series". The team that wins The Spring Series is also awarded a white jersey to wear during that year's race. These events also ensure that all the members of a team, not just those competing in the actual race itself, can still participate and compete.

Qualifications, commonly known as "Quals," is the first and one of the most important series events. Qualifications is a four-lap race around the track to see which team can get the fastest cumulative time. These times determine if a team qualifies to race in Little Five and, if so, where in the field of the top 33 teams they will be placed. Teams start the race lined up in 11 rows of three, starting with the pole winner up front on the inside, and teams choose their pits and jerseys in the order in which they qualify, so this is another reason to qualify high. Each team is given three attempts to qualify. The reason for this is in case a team botches an exchange, then they still have two more chances to qualify. The way that a team can botch an exchange is if a member falls and takes the bike down with him, or if the team does not perform the exchange in the given distance, marked by white lines on the track. A team can use as many as four riders or as few as two riders. But whatever number of riders they use to qualify is the fewest riders they can use for Little Five. Meaning that if a team qualifies with four people, then that team must race with four people. But if they qualify using only three people, then they can use three or four people on the day of Little Five. The team that qualifies on the pole is given a green jersey for the race.

Like a qualification, an Individual Time Trial (ITT) is a four-lap (one mile) sprint around the track. But unlike qualifications, it is performed individually. It is a test of both speed and sprint endurance. There are up to four riders on the track at a time. One rider is placed at each turn of the track. The riders line up with the start/finish line that is drawn in white on the track. Then a race official will come behind the rider and hold the bike steady so that the rider can set both feet on the pedals. In recent years, there has been a five-beep countdown, but in 2007 a gun start was used. The riders begin from a dead stop and race around the track. It is possible to catch other riders on the track while racing, but it is important not to draft. A rider caught blatantly drafting off of another rider is automatically disqualified.

In the Miss-N-Out event there are heats of 5 to 8 riders, depending on the number of riders signed up for the day. Riders all start on the same line and are given one lap to get the position they want and to gain some speed. Once they cross the start line again, the race begins. The riders race around the track and every time the pack crosses the start/finish line, the last one to cross is out and must leave the track. Riders keep racing until there are only three riders left. These three riders move on to the next round. This process continues until the final heat of eight. In this heat, riders continue to race and get out until the last three remain and then they commence a one-lap full-out sprint and the first-, second- and third-place winners are determined by the order in which the riders cross the finish line.

This event is geared more towards the team rather than the individual. In this event two teams of four race around the track in a pace line for 15 laps (3.75 mi) for the men and for the women, each team in hot pursuit of the other since they start on opposite ends of the track. Each team can have only one person drop out of the pace line during the course of the race. Meaning that only three team members need to finish. The team's time is taken as the time of the 3rd rider to cross the line. The two fastest teams then match up against each other for a final head-to-head competition to determine the champion of the event (separately for the men and women).

Indiana University Student Foundation, as well as Riders Council, a group of students that make up the rules committee for the race, also offer Fall events for students to participate in. They also offer skills clinics. Events in the Fall Series include ITTs, Street Sprints, CycloCross and Tuesday Night Race Series. Fall Series results do not count toward Little 500.

Each night is broken up into three events. Scratch races, in which the men will compete ten laps and the women eight. Points Races, in which points are awarded every 5 laps of a predetermined overall number of laps. The top four riders on the ‘points lap’ receive points: 5, 3, 2, and 1 for 1st through 4th. The winner is the one with the most points at the end of the race. The men ride twenty laps and the women ride fifteen. The third event consists of Miss-N-Out Heats.

The events of the Little 500 were dramatized in the 1979 Academy Award-winning movie Breaking Away, which depicts a group of Bloomington townies who enter the race as the "Cutters" (from the local Indiana limestone stonecutters) to defeat the favored fraternity teams. Thirty years later, in 2009, Smithville produced a half-hour-long documentary Ride Fast, Turn Left that followed four teams preparing for and competing in the race. In February 2015, One Day in April was released which depicts two men's and two women's teams' preparation and dedication preceding the race.

A Bollywood movie Jo Jeeta Wohi Sikandar, based on the Little 500, was made in the year 1992, starring Aamir Khan.

Highlights of the 1981 race were shown on ESPN and the first major coverage was by CBS Sports Saturday for the 1982 race. CBS's auto racing announcer, Ken Squier called the race, with Dave Blase providing color commentary. The races have also been broadcast live on the Indiana University student radio station WIUX and on television since 2002 on AXS.tv (formerly known as HDNet), which is owned by Indiana University alumnus Mark Cuban.

All content from Kiddle encyclopedia articles (including the article images and facts) can be freely used under Attribution-ShareAlike license, unless stated otherwise. Cite this article:
Little 500 Facts for Kids. Kiddle Encyclopedia.