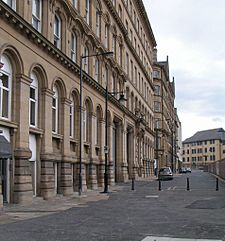 The buildings within Little Germany date back to the 19th century, developing from 1855. They are the legacy of Jewish merchants from mainland Europe who spent large sums of money constructing imposing warehouses for the storage and sale of their goods for export. A large proportion of the merchants came from Germany hence the name Little Germany. Architectural practices included Milnes & France, Lockwood & Mawson, Andrews & Delaunay and J.T. Fairbank building in italianate style. One, by George Corson (1871) is in a baronial style, for Scottish clients. Caspian House (61 East Parade) was built in 1873, as the warehouse of D. Delius and Company; the senior partner in the business was the father of the composer Frederick Delius.

Little Germany is still one of Bradford's busiest commercial areas, with over 110 businesses and organisations with 3,000 workers. It attracts around 100,000 visitors each year. The local authority is currently promoting plans to regenerate the area by renovating and converting the interior of the old mills into housing, hotels, offices, whilst preserving the originally Victorian distinctive architecture.

In April 2012 retail giant Freeman Grattan Holdings, now a German-owned company, secured a deal to open a new head office and house around 300 staff in a Grade-II-listed former wool warehouse in Little Germany.

Little Germany is also the home of the Bradford Playhouse, which has a mural on the back of the building that commemorates the centenary of the founding of the Independent Labour Party in Bradford in 1893. 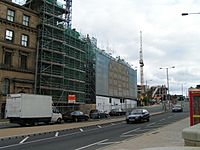 Ham Construction undertook the redevelopment of Eastbrook Hall in Little Germany. The project cost an estimated £11 million and converted the old building into 63 high-quality apartments as well some commercial usage on Leeds Road. The project included a refurbishment of the exterior and roof of the building which suffered extensive fire damage. The hall was built in 1903 and was originally used as a Methodist mission. The redevelopment was being funded through a public private sector funding agreement, as well as the Princes Regeneration Trust. Work was finally completed in 2008, some months after the original projected finish date was set.

The Gatehaus is an 11-storey glass building recently constructed within the Little Germany district. Construction began in 2005 and was completed in 2007 with a total cost of £22 million. The project was originally proposed as a 17-storey landmark but was changed due to a rethink after suggestions that its height was incompatible with the surrounding Victorian buildings. The scheme was developed by Asquith Properties.

All content from Kiddle encyclopedia articles (including the article images and facts) can be freely used under Attribution-ShareAlike license, unless stated otherwise. Cite this article:
Little Germany, Bradford Facts for Kids. Kiddle Encyclopedia.