Little Woodham, also known as "The Living History Village of Little Woodham" or "The Seventeenth Century Village", is a living museum dedicated to recreating life in a rural village in the mid-17th century. It is situated in ancient woodland in Rowner, on the Gosport peninsula, Hampshire. 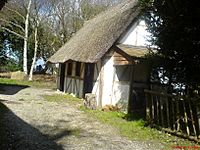 The Spinners Cottage in Little Woodham. 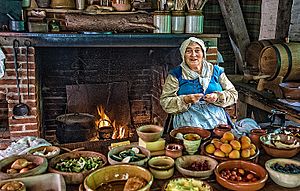 The hamlet of Little Woodham was initially created in 1984 as a temporary reenactment of village life on the eve of the English Civil War by members of The English Civil War Society as part of their enactment of the fictional Battle Of Stokes Bay. Following this, Society volunteers continued the exhibition during the summers of 1984 and 1985.

When the English Civil War Society announced they would be unable to continue, local residents formed the Gosport Living History Society to take over the running of the village to preserve it as an educational resource and tourist attraction. The Gosport Borough Council provided much of the financing and administration until 1995 when the Gosport Living History Society became a registered charity and took on sole responsibility for funding and administration, and in 2007, Little Woodham won the "Best Leisure & Tourism Venue" in the "Go Gosport". 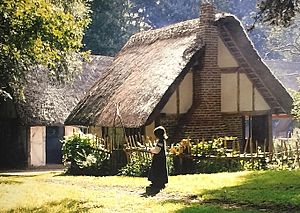 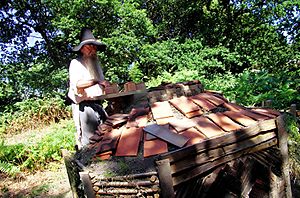 Little Woodham has the only 17th century replica pottery kiln in the world, carefully reconstructed using the same materials and techniques. It was fired for the first time in 2015 and has been fired each year since with all the pottery made using the kick wheel turntable in the 17th century Pottery. 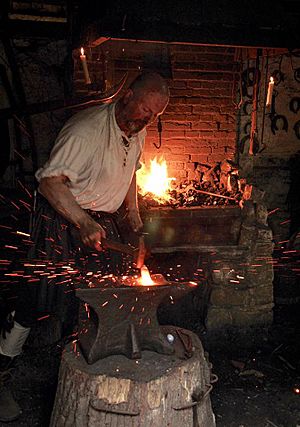 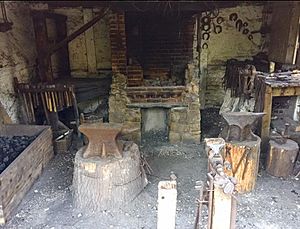 There are a number of other trades and crafts throughout the village, including weavers and wool dyers, a wood turner, button maker, apothecarist, scribe, trickster and barber surgeon and many more.

May Day: story-telling, decorated houses, the Green Man and the Hobby horse.
17th century Kiln firing: The Master Potter loads up and fires the 17th century pottery kiln. This kiln is the only working 17th century replica kiln in existence, and all the pottery that will be in the kiln has been made in the 17th century potter's work shop using a kick wheel turn table.
Craft Day: A day where leather workers, walking stick makers, potters, blacksmiths, weavers, woodworkers, quilters work in the village. 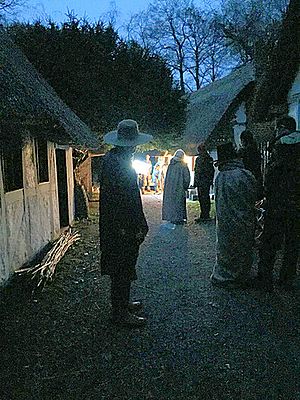 All content from Kiddle encyclopedia articles (including the article images and facts) can be freely used under Attribution-ShareAlike license, unless stated otherwise. Cite this article:
Little Woodham Facts for Kids. Kiddle Encyclopedia.