The land had been private property until the twentieth century when large connecting plots were donated by various community members to form what is known today as The Loantaka Brook Reservation. The Reservation began as a public park after the Seaton Hackney Stables were added to the park system through a donation from Mr. and Mrs. Paul Moore in the 1900s. The Loantaka Brook Reservation began official service in 1957.

A subsequent addition was made by Helen Hartley Jenkins Wood. The wooded area was donated by Marcellus Hartley Dodge Sr. and Geraldine Rockefeller Dodge. The donation by Mr. and Mrs. Dodge helped to bring together the two largest tracts of land in the reservation. The trail system is part of 570 acres in one of New Jersey's most populated counties. In the past, the trail was mostly used by hikers and horseback riders, but since the creation of trails with multiple surfaces, including a car-wide macadam trail as well as dirt and gravel trails, the park has become more user friendly for cyclists, rollerbladers, and other outdoor enthusiasts.

There are reports of efforts to try to expand the system in the future, possibly by connecting the Loantaka trails with those of the nearby Great Swamp National Wildlife Refuge.

In 2009, there was a report of new acres being added to the system based on a donation by Helen Mead Platt.

The trails at the Loantaka Brook Reservation are divided into three separate micro-trails. The first portion, known as the Yellow Blaze Trail, starts at the South Street entrance near the horse stables, and continues south until Kitchell Road. The Yellow Blaze section is unique in that it consists of two separate trails that run side-by-side. A crushed limestone trail for horses is visible from the macadam portion of the trail that was repaved in 2012. This pattern of intertwining trails extends through the middle section of trail known as the Blue Blaze Trails. The last portion, The Red Blaze, is the least developed and consists of only macadam surfaces. The park generally has no major hills to climb and has been deemed suitable for young children on bicycles, according to one report. 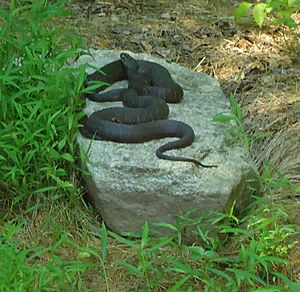 Two snakes, each about four feet long, cuddling on a rock

The park is one of many places in which supervised hunts have taken place as a means to curb deer overpopulation, with warning signs posted prominently. In winter, ice sometimes covers portions of the trails. In addition, the pond near Kitchell Road sometimes has been overrun with Canada geese, but efforts to discourage the geese have met with mixed success.

The trail features two types of surfaces—an asphalt car-wide surface for bicyclists and packed gravel and limestone trails for horses and joggers. There are parking lots at three locations near entrances. The restrooms along the Loantaka Way Trails are cleaned daily during the summer and each rest area features a working water fountain except during the winter. In addition, there are picnic areas and grills near the South Street and Kitchell Road entrances. There is a children's play area near the South Street entrance.

The Loantaka Brook Reservation is maintained by the Morris County Parks Commission and is currently in the process of being reviewed. There have been renovations such as a macadam surfaced trail and newly added picnic areas. The park has been the venue for bicycle races, music, and fund-raising events. There are annual cleanup events held in the springtime to remove invasive plants and to plant native plants, with volunteers wearing long pants and boots expected to get wet. In 2010, New York Jets football player Jim Leonhard participated in an event on the reservation to raise funds to counter childhood obesity.

All content from Kiddle encyclopedia articles (including the article images and facts) can be freely used under Attribution-ShareAlike license, unless stated otherwise. Cite this article:
Loantaka Brook Reservation Facts for Kids. Kiddle Encyclopedia.