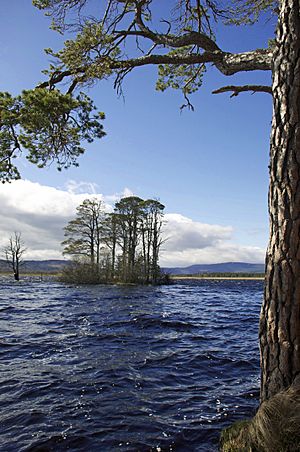 Loch Garten (Scots Gaelic: Loch a' Ghartain) is a large Highland freshwater loch near Boat of Garten, in the Strathspey area of the Cairngorms National Park, in Scotland. It is surrounded by the tall pine trees of the Abernethy Forest, a large area (adjacent to the loch) of which is an RSPB nature reserve. The loch is renowned for its breeding population of ospreys, which lend Boat of Garten its nickname "The Osprey Village".

Careless behaviour towards the osprey in Britain throughout the 19th century meant that it became extinct as a breeding bird by the early 20th. However, in 1954 two Scandinavian breeding birds came to Garten completely of their own accord and set up a nest in the forest by the loch. Slowly the species recolonised Scotland (for more information see ospreys in Britain), and the RSPB and other organisations helped them along the way (not an easy task due to the illegal activities of egg collectors and other irresponsible people). The reserve was purchased by the charity and since then the nest has always been closely monitored. Recently a viewing hide was built relatively near to the nest so that visitors may come and see these birds of prey easily. The hide has telescopes and other optical devices inside, as well as television screens showing close-up views of the fledglings and their parents. Live video and still pictures of the nest can be viewed on the RSPB Loch Garten Reserve web-site.

Ospreys are not the only creatures to be found at Loch Garten. Capercaillies, though difficult to see, do inhabit the remoter parts of the reserve and can be seen performing their annual lek via the spring "Caperwatch". Red squirrels can be seen very easily around the hide, especially on the feeders put out for them. Smaller birds such as the siskin, common chaffinch (in very large numbers) and great spotted woodpecker are also present and easy to spot on the feeders. The crested tit and Scottish crossbill are more reserved in their behaviour and more difficult to find. Wigeon live by and swim on the loch. 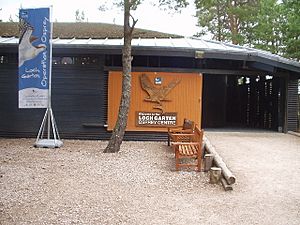 Entrance to the Osprey Centre

The Loch Garten Osprey Centre is a bird-watching facility on Loch Garten that focuses on the nest of two ospreys. It is an RSPB facility located in the Caledonian pine forest.

The birds return to the nesting site every year and the numerous binoculars and telescopes within the centre allow for effective bird watching. Visitors can also see red squirrels and other small birds feeding in front of the bird hide. A pair of ospreys have been nesting at the site every year since 1959. The tree which houses the nest died due to the droppings and remains of prey from the nesting birds. To protect the site, the remaining tree trunk is supported by a strut and helps form a sturdy platform for the nest.

The surrounding forest includes walking different paths passing by a large loch which is also known as Loch Mallachie. Some of the trails link up with the Speyside way. The Abernethy Forest RSPB reserve where the centre is located is among the largest in nature reserves Europe.

All content from Kiddle encyclopedia articles (including the article images and facts) can be freely used under Attribution-ShareAlike license, unless stated otherwise. Cite this article:
Loch Garten Facts for Kids. Kiddle Encyclopedia.