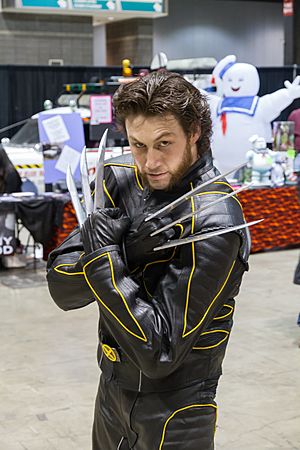 A cosplayer dressed up as the movie version of Wolverine.

Logan is the main character of the 20th Century Fox series of X-Men movies. He was played by Hugh Jackman in six X-Men movies and three solo Wolverine movies from 2000 to 2017.

James Howlett was born in the 19th century and learned he had claws on each hand. He later participated in several wars.

In the year 2029, Logan retired from being an X-Man and decided to be a cab driver.

Hugh Jackman's performance of Wolverine has been well-liked since the first movie.

All content from Kiddle encyclopedia articles (including the article images and facts) can be freely used under Attribution-ShareAlike license, unless stated otherwise. Cite this article:
Logan (movie series character) Facts for Kids. Kiddle Encyclopedia.