Omolola (Lola) Eniola-Adefeso is a Professor of Chemical Engineering, Biomedical Engineering, and Macromolecular Science and Engineering at the University of Michigan. Her research looks to design biocompatible functional particles for targeted drug delivery. 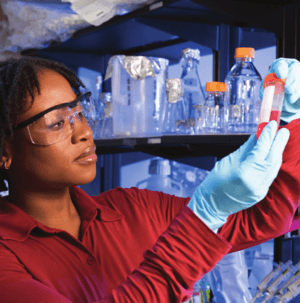 After completing her graduate studies, Eniola-Adefso worked in the Baylor College of Medicine as a National Institutes of Health postdoctoral fellow. Eniola-Adefso joined University of Michigan in 2006. In 2013 she was named a Miller Faculty Scholar at the University of Michigan. She is interested in the interactions between blood leukocytes and endothelial cells in vessel lumen lining, and how they change during inflammation response. After losing her father to heart disease, Eniola-Adefso began to research new treatments for it.

Her research group work on:

Eniola-Adefeso is a champion for women and underrepresented minority students within University of Michigan. She has established a mentoring scheme and served as graduate chair, recruiting the most diverse cohort of students in the department's history. She encouraged undergraduate students to develop experiments for K-12 teachers to use in their classrooms. Eniola-Adefso has been involved in the College of Engineering NextProf program, which brings women and minority students to campus to experience academic life.

All content from Kiddle encyclopedia articles (including the article images and facts) can be freely used under Attribution-ShareAlike license, unless stated otherwise. Cite this article:
Lola Eniola-Adefeso Facts for Kids. Kiddle Encyclopedia.