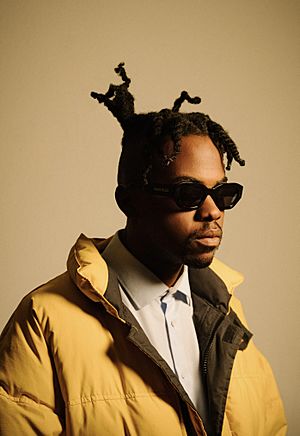 London Future is a music producer, singer and songwriter from Trinidad and Tobago, in the Caribbean Islands.

In 2013, London connected with music producer Diplo after releasing Electronic Music online. Subsequent productions then lead him to connect with music producer Skrillex, DJ at Tomorrowland in Belgium, release songs on Mad Decent record label and a record deal with Ultra Records.

In 2020, London Future decided to sing as well as produce. He sang with Nessa Preppy in the song "So High."

All content from Kiddle encyclopedia articles (including the article images and facts) can be freely used under Attribution-ShareAlike license, unless stated otherwise. Cite this article:
London Future Facts for Kids. Kiddle Encyclopedia.