Long Meadow Grove is located primarily on the west side of Great Western Divide Highway (M 107), directly across the road from Redwood Meadow Campground. The grove is relatively flat and easily accessible from the main road. It is best to visit in the summer when the road is open, or in the winter when accessible only by skis or snowmobile. A small vehicle fee is charged to help maintain and improve facilities at the grove, the most recent of which was the construction of a wooden boardwalk that was completed in 2018.

On April 15, 2000, then president Bill Clinton proclaimed the establishment of the Giant Sequoia National Monument from beneath what is now called the Proclamation Tree.

After the winter of 2003-2004, approximately 200 dead trees (none of which were giant sequoias) threatened the safety of visitors and forced the closure of the trail. On April 29, 2004, the Forest Service held a public meeting at the trail to see the hazard trees and to discuss public concerns and options. In May, a short portion of the trail was cleared and reopened while forest officials determined how best to remove the remaining hazards.

On August 23, 2004, the entire trail was closed so that remaining hazard trees could be removed. Extra measures were taken during the removal to protect the giant sequoias and local wildlife. Sequoia National Forest personnel felled the hazard trees and removed debris that could increase fire danger. Some logs were left to provide ecological benefits, some were chipped, and over 300 cords (over 1,087 cubic meters) of wood were made available to the public purchasing personal use firewood permits. Some limbs were piled and burned by fire crews. A helicopter was hired under contract to fly out some of the largest pieces of wood. On July 1, 2005, the trail reopened after it was repaired and rehabilitated.

On September 30, 2011, a pair of intertwined giant sequoias collapsed across the northernmost section of the main loop trail. Later, during the winter of 2018/19, another giant sequoia fell across the first two from the southwest, destroying part of the newly constructed boardwalk. Both events were determined to have been caused by heavy soil saturation during the unseasonably wet winters of 2010/2011 and 2018/19. 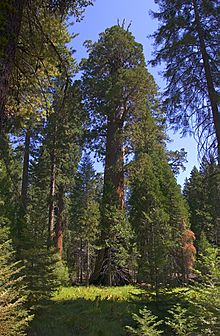 Red Chief, the 40th or 41st largest giant sequoia in the world.

There are several noteworthy sequoias in this grove, including:

All content from Kiddle encyclopedia articles (including the article images and facts) can be freely used under Attribution-ShareAlike license, unless stated otherwise. Cite this article:
Long Meadow Grove Facts for Kids. Kiddle Encyclopedia.