Lorenzo Quinn (born May 7, 1966) is an Italian sculptor and former actor, and the fifth son of actor Anthony Quinn.

Quinn was born in Rome, Italy, a son of the Mexican-American actor Anthony Quinn and his wife Iolanda (born Jolanda Addolori). Quinn was raised in the United States and Italy and presently lives in Barcelona in Spain. Quinn began practicing art as a painter in the early 1980s when he enrolled at the Academy of Fine Arts in New York City. 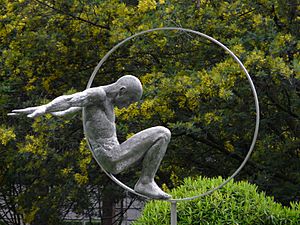 In 2008 Evolution, an exhibition of Quinn’s output, was chosen to inaugurate the new premises of Halcyon Gallery in Mayfair, London, and the gallery published a book on his work.

Equilibrium, an exhibition of Quinn’s sculptures, followed in November 2009, coinciding with the installation of Give and Take III in Berkeley Square for six months. Included in the show were several new sculptures, including What Came First? – male and female forms lying in egg-shaped hemispheres – and Home Sweet Home – a marble woman cocooned in barbed wire.

Quinn's Forces of Nature series of sculptures appear in different locations around the world including England, the United States, Singapore and Monaco. 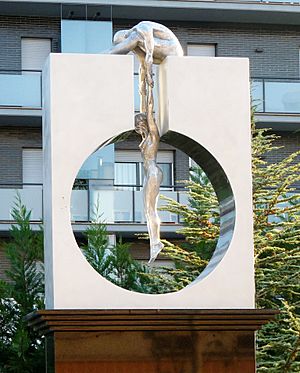 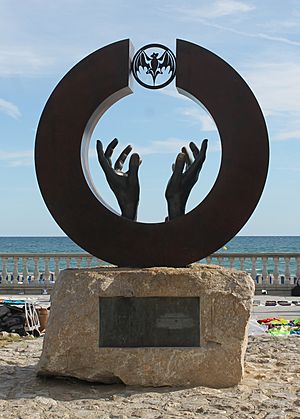 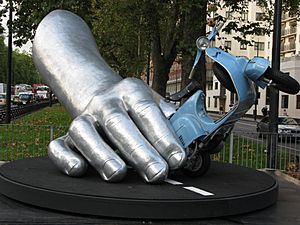 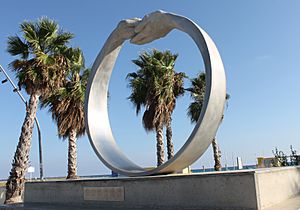 Dar y Tomar (Give and Take) 2013 on the Passeig Maritim, Castelldefels, Spain

"Support" 2019 at the Ca’ Sagredo Hotel, Venice.The installation is "a gigantic sculpture of a child’s hands reaching out of the Grand Canal, calling attention to climate change that threatens, among other things, to sink the lagoon city."

"Building Bridges" is a part of the Venice Biennale. The installation consists of "[s]ix pairs of arching hands creating a bridge over a Venetian waterway, symbolic of the need to build bridges and overcome divisions."

Among other commissions, for the people of Birmingham, Quinn created the sculpture Tree of Life representing those that had perished in the Birmingham air raids in World War II.

He has also worked on commissions for the Sports Academy ASPIRE in the Gulf states and many in Spain where he currently lives with his wife and children.

Quinn also created the sculpture Encounters, commissioned by Fundatur and donated to the city of Mallorca in 2003. It is now situated opposite the Museum of Modern art in Palma de Mallorca.

Quinn created a "living sculpture" in the city of Sant Climent de Llobregat in Barcelona.

He also has a permanent exhibition at the Rafart Gallery in Almenar, Spain.

Quinn designed the 'Ride The World' trophy for the MOTO GP championships.

Quinn supports many charities. Proceeds from the sale of his sculpture Friendship Fish went to environmental causes. He was a Young Artists Patron for Unesco. He donated the sculpture Hope to the Blind Museum (Museo Tiflológico) in Madrid, Spain. He also designed the "Children In Need" award which was awarded to Heather Mills and Phil Collins in 2005.

Quinn also co-owns an Italian Restaurant Galeria Gastronomica situated in Barcelona, which is also the setting for many of his sculptures. Most of the restaurant's hardware items such as the cutlery were designed by him.

All content from Kiddle encyclopedia articles (including the article images and facts) can be freely used under Attribution-ShareAlike license, unless stated otherwise. Cite this article:
Lorenzo Quinn Facts for Kids. Kiddle Encyclopedia.