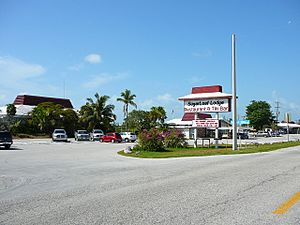 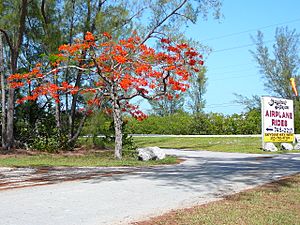 U.S. 1 (or the Overseas Highway) crosses the key at approximately mile markers 16.5–17.5. Due to the routing of U.S. Route 1, it appears that Upper Sugarloaf Key and Lower Sugarloaf Key are separate islands, but they are actually one large "U"-shaped island.

It has Sugarloaf Lodge and restaurant, an airport, a volunteer fire department, and a bat tower built in 1929 which is listed as a historic site. The tower was put there by a man named Perky to control the mosquito problem in the Lower Keys, but when the bats were put in, they flew away, never to return. Mr. Perky intended to found a city named after himself, but the city did not succeed due to the local mosquitoes.

All content from Kiddle encyclopedia articles (including the article images and facts) can be freely used under Attribution-ShareAlike license, unless stated otherwise. Cite this article:
Lower Sugarloaf Key Facts for Kids. Kiddle Encyclopedia.