Kids Encyclopedia Facts
Not to be confused with Sugar Loaf Cay, in Central Abaco, the Bahamas.

Sugarloaf Key is a single island in the lower Florida Keys that forms a loop on the Atlantic Ocean side giving the illusion of separate islands. Although frequently referred to simply and with technical accuracy as "Sugarloaf Key", this island contains two distinct island communities, known as Lower Sugarloaf Key and Upper Sugarloaf Key.

The name Sugarloaf, is variously attributed as arising from either an Indian mound on the east side of Upper Sugarloaf Key, north of the present highway was said to look like an old-fashioned loaf of sugar or from the variety of pineapple called "sugarloaf" that was once grown in the area. These pineapples are rarely in commercial use any longer since they are soft and do not travel well. 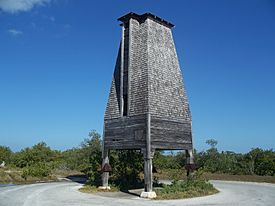 Plant species native to the island include buttonwood, poisonwood, sea grape and thatch palm. Of fauna, ibises are found on the island, and dolphins, parrotfish, snapper, barracuda and octopus can be seen in the local waters.

All content from Kiddle encyclopedia articles (including the article images and facts) can be freely used under Attribution-ShareAlike license, unless stated otherwise. Cite this article:
Sugarloaf Key Facts for Kids. Kiddle Encyclopedia.