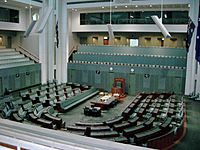 Inside the Australian House of Representatives

A lower house is one of two chambers of a bicameral legislature. The other chamber is called the upper house.

Although it is called the "lower" house, in many legislatures in the world it actually has more power than the "upper" house. 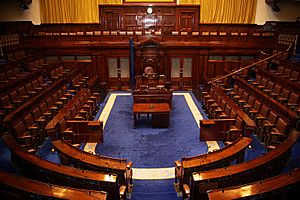 All content from Kiddle encyclopedia articles (including the article images and facts) can be freely used under Attribution-ShareAlike license, unless stated otherwise. Cite this article:
Lower house Facts for Kids. Kiddle Encyclopedia.