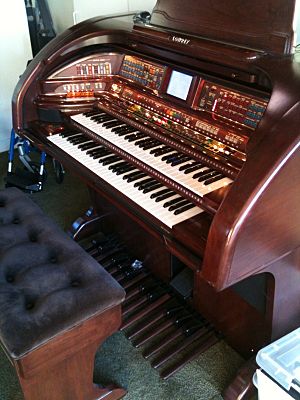 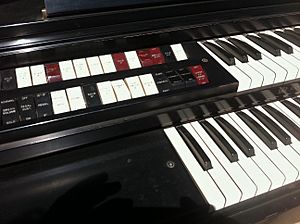 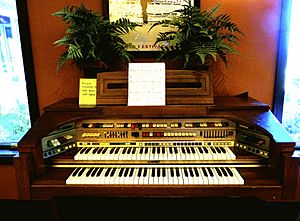 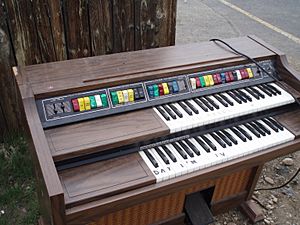 The Lowrey organ is an electronic organ named for its developer, Frederick C. Lowrey (1871-1955). He was a Chicago-based industrialist and entrepreneur. It was in 1955, the year he died, that Lowrey's full-sized electronic organ was first commercially successful. It was called the Model S Spinet or Berkshire. Lowrey had earlier developed an attachment for a piano. This added electronic organ stops on 60 notes while keeping the piano functionality. It was called the Organo. It was first sold in 1949 It was a successful competitor to the Hammond Solovox.

During the 1960s and 1970s, Lowrey was the largest manufacturer of electronic organs in the world. In 1989, the Lowrey Organ Company produced its 1,000,000th organ. Up until 2011, Lowrey organs were built in LaGrange Park, Illinois. In 2011, it was announced that some models would be made in Indonesia.

From 1918-1940's, Frederick Lowrey experimented with electronic organ design. He tried different methods of tone generation. In the 1940s he fixed on the Eccles-Jordan circuit. This is a stable flip-flop oscillator. It became a Lowrey hallmark. The Lowrey organ relied on all-electronic tone generation. This was different to its main competitor, the Hammond organ. Hammond used electromechanical tonewheels until 1975. Lowrey led Hammond in the development of automatic accompaniment features. In 1968, automatic rhythm was added. In 1970, the Genie model added automatic left hand and pedal. Lowrey originally targeted the home entertainment market. Lowrey also produced theatre organs and a full 2-manual with pedal church organ.

Garth Hudson, the keyboardist of The Band, played a Lowrey Festival organ on many of the group's most notable songs. Its sound can be heard prominently on the 1968 recording of "Chest Fever", which begins with a Bach-inspired prelude/intro.

The Beatles' 1967 song "Being for the Benefit of Mr. Kite!" included use of a Lowrey organ. It was used to help create a fairground atmosphere. A Lowrey DSO Heritage organ was used to produce the opening for "Lucy in the Sky with Diamonds".

The Who song "Baba O'Riley" used a Lowrey Organ, on a percussive "marimba repeat" setting, to give the synthesizer-like background noise.

Mike Oldfield made use of the instrument quite extensively on his Tubular Bells album, and on several later albums as well. The Gotye song State of the Art was written to showcase the sounds of the Lowrey Cotillion model D-575.

From 1966 to 1971, Lowrey produced combo organs for the guitar maker Gibson. The most popular of these was made in 1966, called the Kalamazoo K-101, but was soon renamed the Gibson G-101. The Gibson branded organs' design and circuitry were based on Lowrey's "T-1", "T-2", "TLO-R" and "Holiday" spinet models. They had several additional features that made their sound distinctive from the Lowrey models. The extra effects included "Repeat", "Glide", and "Trumpet Wow-wow".

In the 1980s, Lowrey launched the MicroGenie series of portable organs. These had built-in speakers. Some models could run on batteries. They including the MicroGenie V60, V100/101, V105, V120, V125 and MicroGenie Pro V600 (which was programmable and had MIDI capability).

All content from Kiddle encyclopedia articles (including the article images and facts) can be freely used under Attribution-ShareAlike license, unless stated otherwise. Cite this article:
Lowrey organ Facts for Kids. Kiddle Encyclopedia.