Luna Park is the name of an amusement park in Coney Island, Brooklyn, New York City. It opened on May 29, 2010, at the site of Astroland, an amusement park that had been in operation from 1962 to 2008, and Dreamland, which operated at the same site for the 2009 season. It was named after the original 1903 Luna Park which operated until 1944 on a site just north of the current park's 1000 Surf Avenue location.

The park was designed, developed, and operated by Central Amusement International, LLC (CAI), a subsidiary of the Italian company Zamperla which built 19 new mechanical rides for the park. There are also interactive games, food and beverage concessions, and live entertainment.

As of 2017, the park's general manager is Fernando Velasquez. 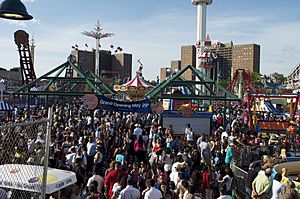 Luna Park during its opening weekend in 2010

At the end of the 2008 season, the Coney Island Astroland amusement park closed. In 2009, a traveling carnival operated amusement rides on the Astroland site, renaming it Dreamland. On February 16, 2010, New York City Mayor Michael Bloomberg announced the winning bid to develop and operate an amusement park to be constructed on the 3.16-acre (12,800 m2) former site of Astroland in Coney Island would be awarded to Zamperla/Central Amusement International under a 10-year lease.

Besides the new rides brought in by Zamperla, many older rides from Astroland were incorporated into Luna Park. These included the old park's centerpiece, "Astrotower", which was not operational; another inherited ride was the landmarked Cyclone roller coaster, which was leased out to Astroland in 1975. Some of the other old spaced themed elements were incorporated into the amusement areas.

On July 2, 2013, Luna Park was evacuated as a precaution due to a problem with the Astrotower swaying; part of the attraction remained closed over the Fourth of July. During that time, construction crews worked day and night to dismantle the tower and by July 6 it had been reduced to a four foot high stump with the pieces sold to a local junkyard for scrap.

In May 2014, the Thunderbolt steel coaster opened at Luna Park. It was named after the 1925 coaster that had been demolished in 2000.

In August 2018, the New York City Economic Development Corporation and the New York City Department of Parks and Recreation announced that Luna Park would be expanded. The new rides would be located on a 150,000-square-foot (14,000 m2) city-operated parcel between West 15th and West 16th Streets, next to the new Thunderbolt coaster. The rides would include a 40-foot-high (12 m) log flume, as well as a zip-line and a ropes course, that were originally scheduled to open in 2020. There would also be a public plaza and an amusement arcade within the newly expanded amusement area. These construction projects were placed on hold in early 2020 with the COVID-19 pandemic in New York City. Alessandro Zamperla, president of Luna Park's owner Central Amusement International, stated in mid-2020 that he hoped to have these rides open in 2021. 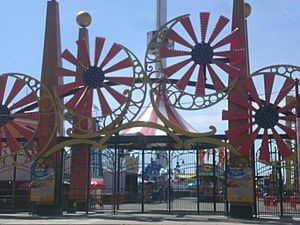 Luna Park's entrance is patterned after the entrance to the original 1903 Luna Park and was built on the ground of the former Astroland amusement park. The new park is the home of nineteen new attractions and games. It is the only area on Coney Island in which the use of cash to pay for amusements and rides is not allowed; visitors must buy Luna Cards and spend Luna Credits or use an unlimited ride wristband that allows for four hours of ride time on select rides. Throughout the park variations of the Coney Island "Funny Face" logo can be seen. The logo, from the early days of George C. Tilyou's Steeplechase Park, has been around for a hundred years. 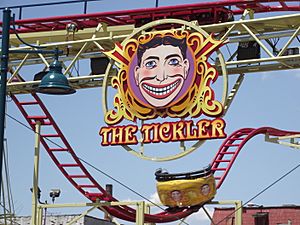 The Tickler ride with the Coney Island "Funny Face" logo. 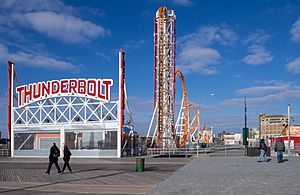 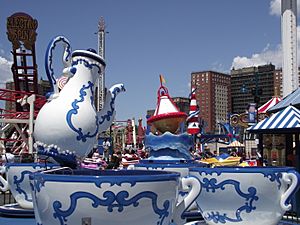 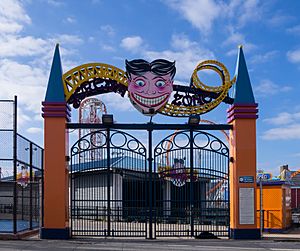 Entrance to the Scream Zone

For the 2011 season, an addition called Scream Zone opened that featured four rides. Since then, more rides have been added. 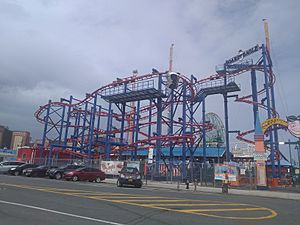 All content from Kiddle encyclopedia articles (including the article images and facts) can be freely used under Attribution-ShareAlike license, unless stated otherwise. Cite this article:
Luna Park (Coney Island, 2010) Facts for Kids. Kiddle Encyclopedia.