The Coney Island Cyclone (also known as the Cyclone) is a wooden roller coaster at Luna Park in Coney Island, Brooklyn, New York City. Designed by Vernon Keenan, it opened to the public on June 26, 1927. The coaster is on a plot of land at the intersection of Surf Avenue and West 10th Street. The Cyclone reaches a maximum speed of 60 miles per hour (97 km/h) and has a total track length of 2,640 feet (800 m), with a maximum height of 85 feet (26 m).

The coaster operated for more than four decades before it began to deteriorate, and by the early 1970s the city planned to scrap the ride. On June 18, 1975, Dewey and Jerome Albert, owners of the adjacent Astroland amusement park, entered into an agreement with New York City to operate the ride. The roller coaster was refurbished in the 1974 off-season, and reopened on July 3, 1975. Astroland Park continued to invest millions of dollars in the upkeep of the Cyclone. After Astroland closed in 2008, Cyclone Coasters president Carol Hill Albert continued to operate it under a lease agreement with the city. In 2011, Luna Park took over operation of the Cyclone.

The coaster was declared a New York City designated landmark on July 12, 1988, and was placed on the National Register of Historic Places on June 26, 1991. 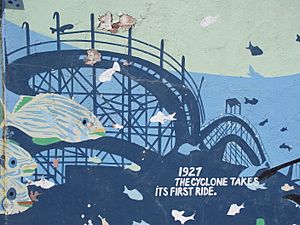 Coney Island was the largest amusement area in the United States from about 1880 to World War II, attracting several million visitors per year. At its height, it contained three amusement parks (Luna Park, Dreamland, and Steeplechase Park) and many independent amusements. The Cyclone site was occupied by the Giant Racer from 1911 to 1926.

The success of 1925's Thunderbolt coaster and 1926's Tornado led Irving and Jack Rosenthal to buy land at the intersection of Surf Avenue and West 10th Street for a coaster of their own. With a $100,000 investment, they hired leading coaster designer Vernon Keenan to design a new ride. Harry C. Baker supervised the construction, which was done by area companies including the National Bridge Company (which supplied the steel) and Cross, Austin, & Ireland (which supplied the lumber). Its final cost was reportedly $146,000 to $175,000. When the Cyclone opened on June 26, 1927, a ride cost 25 cents (equivalent to $3.07 in 20182018); the present-day ticket price is $10.

In 1935, the Rosenthals took over the management of New Jersey's Palisades Park. The Cyclone was placed under the supervision of Christopher Feucht, a Coney Island entrepreneur who had built a ride called Drop the Dip in 1907 and performed minor retracking work on the coaster. The ride's first drop was reduced by 5 feet (1.5 m) in 1939, and it continued to be extremely popular. A midget would originally zap disembarking riders with an electric paddle, a practice which ended during the 1950s.

By the 1960s, attendance at Coney Island had declined. Increased crime, insufficient parking, poor weather, and the post-World War II automotive boom were all cited as contributing factors in the decline. Coney Island's last remaining large theme park, Steeplechase Park, was closed in 1964 and subsequently demolished. The Cyclone was sold to the New York City Department of Parks and Recreation (NYC Parks) in 1965.

A new building housing the New York Aquarium had been constructed west of the Cyclone in 1954. New York City decided that an extension to the New York Aquarium would be a better use of the Cyclone property in 1967, and the city began procedures to claim the property by eminent domain. Its owners, East Coaster Corporation, unsuccessfully fought the city; they did minimal long-term maintenance, enough to keep the ride operating safely. The city bought the Cyclone for $1.2 million in 1969.

The Cyclone was then operated under contract by East Coaster Corporation while the city worked with the New York Aquarium on plans to redevelop the site. There was a lack of long-term maintenance by the city, and the coaster soon received 101 safety violations. In 1972, when plans to expand the aquarium were announced, a "Save the Cyclone" campaign began to oppose the proposed demolition of Coney Island's last wooden roller coaster. This created a conflict between the aquarium (which supported the Cyclone's demolition) and the Coney Island Chamber of Commerce, which opposed it. The owners of the AstroWorld theme park in Houston were considering buying the Coney Island Cyclone and moving it to Houston. This was eventually rejected as being too expensive, however, and AstroWorld's owners instead built a replica, which they branded as the Texas Cyclone.

By 1974, city officials doubted their decision to purchase the Cyclone and considered leasing the coaster to a private operator. The proposed demolition of the Cyclone was seen as potentially disastrous to Coney Island's economy. The city changed its plans to dismantle the coaster and, in April 1975, invited sealed bids to lease operation of the ride. The owners of the Astroland amusement park won the lease, with a bid of $57,000 per year. After Astroland spent $60,000 to refurbish the Cyclone, the coaster reopened on July 3, 1975. 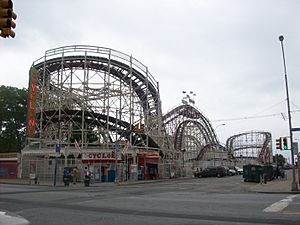 During the 1986 season, insurance disputes forced the Cyclone to stay closed until July. The Cyclone remained in operation as a separate enterprise following the 2008 closure of Astroland and during the single operating season of Dreamland in 2009. The adjacent Luna Park took over management of the Cyclone in 2011, and began a major refurbishment of the coaster during the off-season. The refurbishment, by Great Coasters International, was completed in 2016.

The ride covers 75 feet (23 m) at 834 Surf Avenue and 500 feet (150 m) on West 10th Street, which is owned by NYC Parks. The former concession stands (built into the coaster's structure) were home to the Coney Island History Project, which was moved to a space near the Wonder Wheel. A souvenir stand selling Cyclone-based shirts, hats, and on-ride photos remains.

Each ride in Luna Park charges a number of credits for admission, with each credit typically costing $1. As of July 2019[update], each ride on the Cyclone costs 10 credits ($10); free and reduced-price re-rides have been eliminated. Ride admission is also included in Luna Park's fixed-date and any-date passes. "Bonus credits" accumulated by the purchase of ride credits cannot be used for the coaster. The Cyclone is considered an "irreplaceable" structure, since timber-supported coasters can no longer be built under modern New York City building codes. 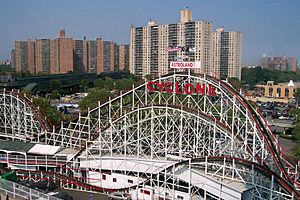 Seen from the west

The train leaves the station heading north and immediately turns right at an almost 180-degree angle, which leads to an 85-foot (26 m) lift hill. It then moves over the first 58.1-degree drop; as the train reaches the bottom of the drop, it comes close to the track above for a headchopper effect. The train then ascends into the first high-speed U-turn to the left, descending again beneath the lift hill and rising to the second 70-foot-tall (21 m) U-turn to the right. It descends parallel to the lift hill, enters a camelback hill and rises to a smaller banked right U-turn, where it dives under the first high-speed curve. After the third U-turn, the train enters a second camelback hill with a fan turn and a smaller airtime section as it approaches a fourth U-turn to the right. The train hops several times more, paralleling the second drop, before entering a final right curve. It drops slightly, ascends into a tunnel with a small left fan turn, and enters a brake run just before re-entering the station.

The track is 2,640 feet (800 m) long, including six fan turns and twelve drops. The ride's top speed is 60 miles per hour (97 km/h), and each ride takes about one minute and fifty seconds. The brown wooden track has red wood fencing alongside it and has a white structural framework, giving it a distinctive appearance. "Cyclone" appears in large, red, incandescent letters on the east and west sides of the lift hill. The coaster is surrounded by a fence.

The Cyclone has three three-car trains, and one train can run at a time. Riders are arranged two across in four rows, for a total of 24 riders per train. The trains have bench seating (rather than individual seats for each passenger), and a single-position lap-bar restraint system which drops across the entire row. The seats do not have headrests.

The station is accessed from the ticket booth on West 10th Street. It consists of two wooden platforms, one on each side of the track; the outer (western) platform is for riders who are boarding, and the inner (eastern) platform is for exiting riders. The station is under a gable roof canopy supported by a steel arch frame, and has segmented arcades along its sides. A mechanical room is partly underneath, and next to, the platform. A vertical sign with incandescent letters spelling "CYCLONE" is outside the station.

Aviator Charles Lindbergh was said to have ridden the Cyclone two years after it opened, and reportedly called the experience "greater than flying an airplane at top speed". Emilio Franco, a mute coal miner with aphonia, visited Coney Island in 1948 and reportedly screamed while going down the Cyclone's first drop. Franco also reportedly said, "I feel sick" as his train returned to the station. According to multiple accounts, he fainted after realizing that he had spoken. Although one version of the story reported that Franco had been mute since birth, a contemporary New York Times story said that he had been mute for five years.

Michael Boodley set a record in 1975 for the most consecutive trips on the Cyclone, riding it 1,001 times over a 45-hour period. Nineteen-year-old Richard Rodriguez broke the record from August 18 to 22, 1977, riding the coaster for 104 hours. He took short bathroom breaks between rides, eating hot dogs and M&Ms and drinking shakes during the ride itself. Rodriguez broke his own record for the longest roller-coaster marathon in 2007, riding for 405 hours and 40 minutes at Blackpool Pleasure Beach in the United Kingdom. In 2009, Howie Lipstein was recognized by the Coney Island History Project as having ridden the Cyclone for fifty consecutive years. In 2019, Luna Park honored him for riding for sixty consecutive years. 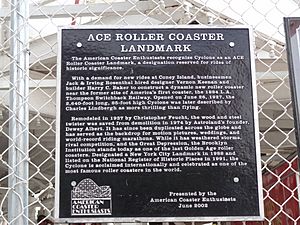 The Cyclone was named a city landmark in 1988, and a National Historic Landmark in 1991. An ACE Coaster Classic and Coaster Landmark, it inspired the name of the Brooklyn Cyclones baseball team, which plays at nearby MCU Park.

All content from Kiddle encyclopedia articles (including the article images and facts) can be freely used under Attribution-ShareAlike license, unless stated otherwise. Cite this article:
Coney Island Cyclone Facts for Kids. Kiddle Encyclopedia.