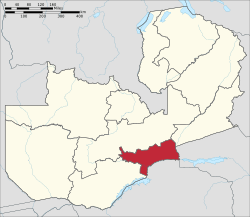 Location of the Lusaka Province in Zambia

Lusaka Province is a province in Zambia. The capital is Lusaka, which is also the national capital. It is the smallest province in Zambia, with an area of 21,896 km². It is also Zambia's most populated and most densely populated province, with a population of 2,191,225 and density of 100 persons per km² as of 2010.

The province is bordered by Zimbabwe and Mozambique, and separated by the Lower Zambezi National Park. Kenneth Kaunda International Airport (in Chongwe District) and Lusaka City Airport (in Lusaka) are the two airports in the province.

All content from Kiddle encyclopedia articles (including the article images and facts) can be freely used under Attribution-ShareAlike license, unless stated otherwise. Cite this article:
Lusaka Province Facts for Kids. Kiddle Encyclopedia.