Luskintyre Airfield is a private aerodrome in the Hunter Region of New South Wales, Australia. The airfield is located in Luskintyre, approximately 19 km (12 mi) north west of Maitland. The airfield site has an area of 92.2 ha (228 acres) and is home to the Luskintyre Aviation Flying Museum; and is primarily used for the restoration of vintage aircraft, particularly de Havilland Tiger Moths. The museum has the largest fleet of operational Tiger Moths in Australia. There are five hangars on the property used for storage and restoration. 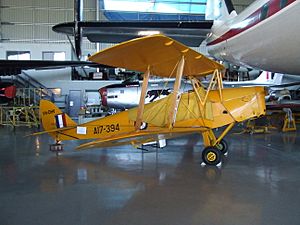 A Tiger Moth similar to those under restoration at Luskintyre

The airfield was established in 1977 with the aim of restoring and operating vintage aircraft. A company specialising in the repair and restoration of early de Havilland aircraft was later established and has operated from a hangar on the airfield for over 30 years.

On 1 May 1994, a visiting Tiger Moth lost engine power and crashed while performing a wing walking demonstration at Luskintyre. Both the pilot and the wing-walker were killed in the accident.

In October 2003, Tiger Moths from Luskintyre participated in The Great Tiger Moth Air Race, an event celebrating 100 years of powered flight and sponsored by aircraft manufacturer Airbus. In September 2010, the airfield hosted flying displays and events coinciding with the 100th anniversary of the first de Havilland aircraft.

'Lunch with the Tiger Moths' is a regular event held on the first Saturday of each month (weather permitting). The event allows visitors to inspect airworthy and under-restoration Tiger Moths and view the museum's collection of memorabilia.

Many recreational pilots as well as professional pilots use the airfield. It is also frequented by aerobatic champion Paul Bennet, and his formation flying team the SkyAces.

All content from Kiddle encyclopedia articles (including the article images and facts) can be freely used under Attribution-ShareAlike license, unless stated otherwise. Cite this article:
Luskintyre Airfield Facts for Kids. Kiddle Encyclopedia.