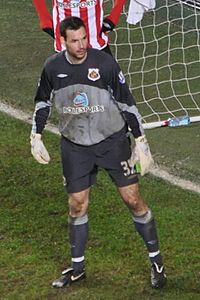 Márton Fülöp (3 May 1983 – 12 November 2015) was a Hungarian professional footballer who played as a goalkeeper. He was born in Budapest.

After playing in Hungary for MTK Budapest FC, BKV Előre SC and BFC Siófok, he signed for English club Tottenham Hotspur, who loaned him to Chesterfield and Coventry, then to Sunderland with whom he permanently signed in 2007.

Further loans to Leicester City, Stoke City and Manchester City ended with a transfer to Ipswich Town. He ended his career with spells at West Bromwich Albion and Greece's Asteras Tripoli. Fülöp also represented his country at under-21 and full international level, earning 24 senior caps from his debut in 2005.

Fülöp died on 12 November 2015 in Budapest after a struggle with cancer, aged 32.

All content from Kiddle encyclopedia articles (including the article images and facts) can be freely used under Attribution-ShareAlike license, unless stated otherwise. Cite this article:
Márton Fülöp Facts for Kids. Kiddle Encyclopedia.