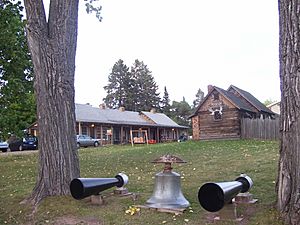 Front lawn of the museum 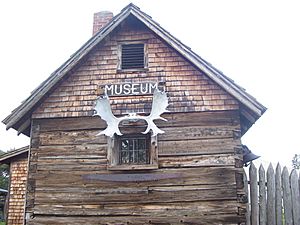 One of the museum's historic buildings

Madeline Island is the only member of the Apostle Islands that is not included in the Apostle Islands National Lakeshore, and is therefore the only island in the group open to commercial development. The historic unincorporated community of La Pointe, was established by French fur traders as a trading post in 1693. Later, in the 19th century, the American Fur Company established a post on the island. Because it was an ancient Native American settlement, and had served for so long as a fur trading site, as well as being the center of early missionary efforts in the area, Madeline Island was deemed an ideal location for a museum relating to important aspects of Wisconsin's history. Inspired by the island's history, two longtime summer residents of the island, Leo and Bella Capser, began organizing in 1955 to create Madeline Island Museum. With the help of many other residents of the island, they compiled a large collection of local artifacts for the museum. To house the artifacts, a wooden structure was constructed by combining pieces of several of the island's historic buildings, including a former La Pointe jail and the American Fur Company's post. The museum opened on June 15, 1958. Ten years later, it was transferred to the Wisconsin Historical Society, which has operated the museum ever since.

Today Madeline Island Museum features exhibits on several aspects of Madeline Island history. The main displays focus on the area's Native American tribes, the fur trade, early missionaries who visited Madeline Island, and the region's maritime history. These exhibits are housed in two buildings, the original museum building built in the 1950s and the Casper Center, an exhibit hall constructed in the 1990s. As of 2004[update], the museum had approximately twelve thousand visitors annually.

All content from Kiddle encyclopedia articles (including the article images and facts) can be freely used under Attribution-ShareAlike license, unless stated otherwise. Cite this article:
Madeline Island Museum Facts for Kids. Kiddle Encyclopedia.