Kids Encyclopedia Facts
Not to be confused with Madison Speedway. 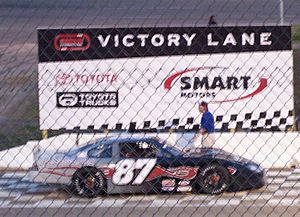 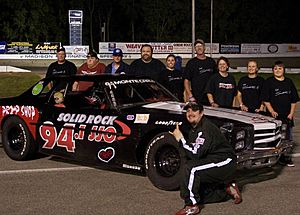 The Madison International Speedway (MIS) is a stock car racing oval in the Town of Rutland near Oregon, Wisconsin. The track is billed as "The Track of Champions" and "Wisconsin's Fastest Half Mile." The weekly program at the track runs on Friday nights under NASCAR Whelen All-American Series sanction.

The track opened in the 1950s as a dirt quarter-mile run by several organizations as Oregon Legion Speedway. Sam Bartus purchased the track in 1963 and paved the track. In 1969, he tore down the quarter-mile track and built a state of the art high-banked half-mile oval and named it "Capital Super Speedway". Fred Nielsen bought the track in 1980 with John and Sue McKarns running the track in 1980 and 1981. Tony Zidar and his brother Bob purchased the track in 1983 and the added 29 rows of grandstand seating along with a scoreboard on the backstretch. They built a quarter mile track in the infield of the half mile so that sportsman drivers from Jefferson Speedway could race at the track. The track resumed operation as a dirt track under the name of Impact Speedway from 1987 until 1989 under the ownership of Craig Henmen, where the World of Outlaws Sprint Cars made numerous appearances. The track was closed down until 1992 when Wayne Erickson, the owner of Slinger Super Speedway, took over. Wayne ran the track until 1996 when Jerry Fillner and his son Kevin Fillner took over. The Fillner family operated the track and made several improvements to the pits and upper concession areas. In 2003, Chicago area businessman Terry Kunes purchased the racetrack and hired Roy Kenseth (Matt Kenseth's father) to be the promoter. After two seasons Roy Kenseth started RK Promotions and decided to leave the track. Steve Einhaus was hired to fill the void left by Kenseth. In 2007 Einhaus will be focusing his attention on the newly formed ASA Midwest Tour (now known as ARCA Midwest Tour) Super Late Model Series. Track promotions were turned over to longtime competitor and official Dave Grueneberg. During his tenure, the track had weekly Friday night races in most seasons but in 2013 it was occasional Sunday afternoon races. In 2015, new ARCA Midwest Tour owner Gregg McKarns purchased the speedway from Kunes. He decided to run weekly Late Models races following the Big 8 Series rules with a monthly Super Late Model event. MIS was later announced as a weekly NASCAR Whelen All-American Series track starting in 2015. It was the third NASCAR weekly track in Wisconsin after Cedar Lake Speedway and La Crosse Fairgrounds Speedway. The late models were designated NASCAR Division I, Sportsman as Division II, and Bandits as Division III. Starting in 2015, the 6Shooter division had its inception. The division consists of six cylinder American made cars which are model years 2002 and older. The division is "True Entry-Level" providing racing experience at a low cost. Points are not awarded and pay is minimal, it's just for fun!

The track was a quarter mile long before it was torn up and replaced with a half mile paved oval in 1969. The first winner on the half mile was Ramo Stott, and the surface's first champion was Jimmy Back. The track seats over 10,000 spectators. There is a quarter mile track inside the half mile. A track veteran described racing the track by saying that you drive into the corners way over your head before you stand on the brakes. The more that you frighten yourself in the corners, the faster that the laps ended up.

As of 2010, MIS featured five weekly divisions. Three race weekly on the half mile outer track: Late models, Area Sportsman, and Hobby Stock. There is a quarter mile track inside the half mile. Weekly division on the inner quarter mile include Legends and Bandits (4 cylinders). Other divisions that race on selected nights include Super Late Models, Super Trucks, Super Stocks, Ford Focus, Midgets, and Bandoleros. The track held Super Late Model races as its premiere class until 2008; the limited late model class became the premiere class in 2009 when it began being called late models.

Panoramic view of the track in the fall of 2014.

All content from Kiddle encyclopedia articles (including the article images and facts) can be freely used under Attribution-ShareAlike license, unless stated otherwise. Cite this article:
Madison International Speedway Facts for Kids. Kiddle Encyclopedia.