Kids Encyclopedia Facts
This page is about the village. For the adjacent town, see Oregon (town), Wisconsin.

Oregon is a village in Dane County, Wisconsin. As of the census of 2020, the population was 11,179. Oregon is part of the Madison Metropolitan Statistical Area. The village is located mostly within the Town of Oregon.

Oregon was settled in 1841 by Bartlet Runey, and the first house was constructed in 1843. Initially the settlement was known as "Rome Corners," and there is a road south of the village which still bears that name. When the Chicago and North Western Transportation Company came though the village in the 1864, their maps indicated a name of "Oregon," and the name was adopted. The village was incorporated in 1881.

Many of Oregon's historical buildings still stand in the downtown district, including the Netherwood Block on the south, the Badger Cycle Company building and original water tower on the southeast on Janesville Street, and numerous business lining the west side of North and South Main Street. The Red Brick School, one of the more distinguishable structures in the village, built in 1922 as the high school, stands north of downtown. It was recently restored and now serves as the business offices for the Gorman Company.

According to the United States Census Bureau, the village has a total area of 4.42 square miles (11.45 km2), all of it land.

Oregon is served primarily by US-14 and Wisconsin Highway 138 and the two highways meet at the village's southeast corner. US-14 previously ran through the village, travelling down North Main Street and then arcing along Janesville Street, but a bypass was constructed from 1969-1973 along the North and East of the village. The previous route is now signed as County Trunk MM.

There were 3,589 households, of which 40.8% had children under the age of 18 living with them, 55.6% were married couples living together, 10.3% had a female householder with no husband present, 4.5% had a male householder with no wife present, and 29.6% were non-families. 23.8% of all households were made up of individuals, and 7.9% had someone living alone who was 65 years of age or older. The average household size was 2.55 and the average family size was 3.04.

The Oregon Police Department and the Oregon Area Fire/EMS District serve the area. 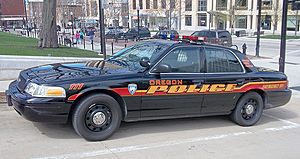 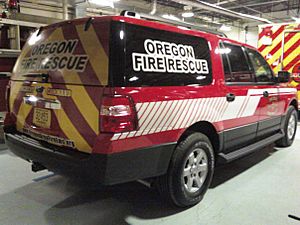 All content from Kiddle encyclopedia articles (including the article images and facts) can be freely used under Attribution-ShareAlike license, unless stated otherwise. Cite this article:
Oregon, Wisconsin Facts for Kids. Kiddle Encyclopedia.