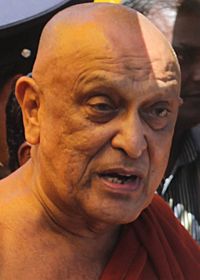 Maduluwawe Sobitha Thero (Sinhala: මාදුළුවාවේ සෝභිත හිමි; 29 May 1942 – 8 November 2015) was a Sinhalese Buddhist Bikku. He was a well-known socialist and social justice activist. He was a Buddhist style non-violent revolutionary and he led campaigns that toppled the Sri-Lankan government on several occasions. He was the chief monk of the Kotte Naga Vihara. He played a key role to bring a new government in 2015 defeating Mahinda Rajapaksa, where he supported a common candidate Maithripala Sirisena for presidency, and Ranil Wickremesinghe to form a new government.

Ven Sobitha died at the age of 73 on 8 November 2015 from multiple organ failure at the Mount Elizabeth Hospital in Singapore.

All content from Kiddle encyclopedia articles (including the article images and facts) can be freely used under Attribution-ShareAlike license, unless stated otherwise. Cite this article:
Maduluwawe Sobitha Thero Facts for Kids. Kiddle Encyclopedia.