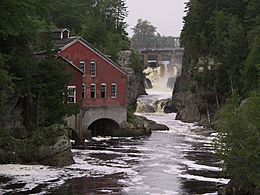 The Magaguadavic River (/ˌmæɡəˈdeɪvɪk/ MAG-ə-DAY-vik; French: Rivière Magaguadavic) is an historic Canadian river located in the province of New Brunswick.

The name "Magaguadavic" is a Maliseet / Passamaquoddy term that is believed to translate into "River of Eels".

With a meander length of 129 km (80 mi), the Magaguadavic River is the sixth longest river in the province. It rises as an outlet of Magaguadavic Lake in York County, flowing south through a low coastal mountain range called the St. Croix Highlands before emptying into Passamaquoddy Bay, a sub-basin of the Bay of Fundy.

The river passes through the following communities from north to south:

There are several bridges and one dam crossing the Magaguadavic River, from north to south:

The Canal is crossed by a single bridge:

All content from Kiddle encyclopedia articles (including the article images and facts) can be freely used under Attribution-ShareAlike license, unless stated otherwise. Cite this article:
Magaguadavic River Facts for Kids. Kiddle Encyclopedia.