Maggea is a locality and former settlement in the Murray Mallee region of South Australia. It is on the Stott Highway between Swan Reach and Loxton and was on the former Waikerie railway line. The town is almost deserted now that the railway line has closed.

Maggea was named in 1915 after the local Aboriginal Australian name for camp. The school operated in the hall from 1919 to 1967. 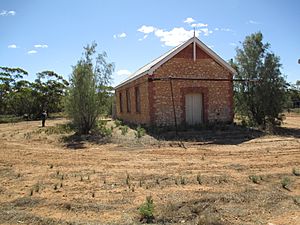 All content from Kiddle encyclopedia articles (including the article images and facts) can be freely used under Attribution-ShareAlike license, unless stated otherwise. Cite this article:
Maggea, South Australia Facts for Kids. Kiddle Encyclopedia.