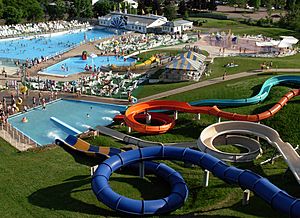 The view of the park from the top of the Kamikaze slide.

Magic Mountain (French: Parc aquatique Magic Mountain), is mainly a water park, which is located in Moncton, New Brunswick, Canada. It is part of the Magnetic Hill tourist site. The park is the largest man-made tourist attraction in Atlantic Canada.

The park was created as an addition to the growing tourist site of Magnetic Hill, which already consisted of the hill itself, and the Magnetic Hill Zoo. Construction on the park commenced on August 12, 1986 and through the efforts of more than 600 construction workers it was completed in less than a year, opening on June 26, 1987. It requires more than 800,000 imperial gallons (3,600,000 L) of water to operate which is heated by propane heaters with a capacity of almost 7 million BTUs (7.4 gigajoules). In 1999 the park came under new ownership and since then several improvements have been made to the park. A children's "Splash pad", two new children's slides and two new body slides named "Pipeline" and "Sidewinder" were constructed. Other developments include:

All content from Kiddle encyclopedia articles (including the article images and facts) can be freely used under Attribution-ShareAlike license, unless stated otherwise. Cite this article:
Magic Mountain (New Brunswick) Facts for Kids. Kiddle Encyclopedia.