The zoo has been accredited member of the Canadian Association of Zoos and Aquariums (CAZA) since 1993.

The Magnetic Hill Zoo began as the Magnetic Hill Game Farm in 1953. Originally, the game farm was home to orphaned and injured indigenous species like owls, bears, and deer. The city of Moncton took over the park in 1979 and began acquiring more exotic species which served as a catalyst for the renaming the farm to Magnetic Hill Zoo.

In 1995, the zoo began a 10-acre (4.0 ha) expansion called the African Oasis. At the same time, the zoo also expanded by adding the Primate Conservation Centre, frog bog, the koi pond, bird garden, the Camel-Zebra exhibit, and a children's playground.

In 1997–98, the Insectarium exhibit, a new entrance building, and new food facilities were built. The bears were moved to a new exhibit, which permitted them to live in a natural habitat for the first time. The zoo's education programs received an Achievement Award from the Canadian Association of Zoos and Aquariums.

A new reptile house exhibit, known as the Ecodome, was opened in 2003. The Ecodome was built on the site of the former bear "pit". The Ecodome was awarded the Environmental Enrichment Award by CAZA. Exhibits for the barbary sheep and bison were also completed.

Between 2003 and 2004 exhibits were expanded or refurbished, including habitats for the otters, wolves, watusi, and eland. A deer contact area was constructed.

In 2005, construction began on the Pridelands exhibit, a habitat for lions and ostrich. The exhibit's grand opening was held in July 2006 and won the Canadian Association of Zoos and Aquariums Environmental Enrichment Award for the exhibit. A new food concession stand was also renovated in 2005 and the zoo was awarded the New-Brunswick Top Attraction Status.

In 2006, significant upgrades were made to the walking path system and signage in order to make the zoo more accessible to the public.

In 2008, a new Cougar Country Exhibit was built which was awarded the zoos third CAZA Environmental Enrichment Award.

In 2009, a new Jaguar Exhibit was built to resemble the Cougar Country Exhibit built the previous year. The zoo's animal collection was expanded to include mandrills, a colobus monkey, and two African lion cubs. Because of the continued successful breeding program of the zoo's black and white ruffed lemurs, the construction of a new enclosure for these monkeys was started. The former Insectarium exhibit was renovated and reopened as The Container.

Friends of the Zoo

The zoo is supported heavily by a fund-raising organization, Friends of the Zoo, which was founded in 1989 by Shirley Dingley, Deborah Fisher, Bruce Dougan, and Carolyn Dunlop. Friends of the Zoo focus primarily on raising funds to improve animal habitats at the zoo. 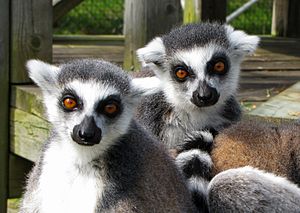 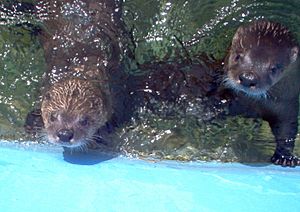 Magnetic Hill Zoo has more than 400 animals, including over 100 indigenous and exotic species or birds, mammals, insects, reptiles and fish. Animals housed at the zoo include:

All content from Kiddle encyclopedia articles (including the article images and facts) can be freely used under Attribution-ShareAlike license, unless stated otherwise. Cite this article:
Magnetic Hill Zoo Facts for Kids. Kiddle Encyclopedia.