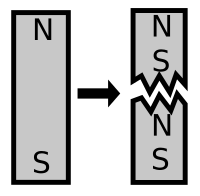 It is impossible to make magnetic monopoles from a bar magnet. If a bar magnet is cut in half, it is not the case that one half has the north pole and the other half has the south pole. Instead, each piece has its own north and south poles. A magnetic monopole cannot be created from normal matter such as atoms and electrons, but would instead be a new elementary particle.

A magnetic monopole is a hypothetical particle in particle physics that is a magnet with only one magnetic pole (a north pole without a south pole or the other way around). Scientists are interested in this, as they are predicted in several particle theories, such as grand unified and superstring. Magnetism in normal bar magnets and electromagnets does not come from magnetic monopoles. There is not enough evidence to even be sure that magnetic monopoles exist in this universe.

All content from Kiddle encyclopedia articles (including the article images and facts) can be freely used under Attribution-ShareAlike license, unless stated otherwise. Cite this article:
Magnetic monopole Facts for Kids. Kiddle Encyclopedia.