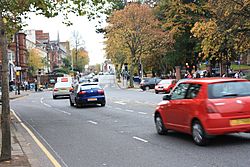 The Malone Road (from Irish Maigh Lón, meaning 'plain of lambs') is a radial road in Belfast, Northern Ireland, leading from the university quarter southwards to the affluent suburbs of Malone and Upper Malone, each a separate electoral ward. The road runs parallel to the Lisburn Road and is linked by over a dozen side streets, while at its northern end, the Stranmillis Road rejoins the Malone Road to form University Road, which in turn joins with the Lisburn Road to become Bradbury Place. Most of the road is in the BT9 postcode district.

At the southern end of the Malone Road lies Malone House, a mansion in the late Georgian style. The house is now maintained by Belfast City Council.

The residential streets leading off the Malone Road and Upper Malone Road are known for their high property prices, in particular, Malone Park. In Northern Ireland culture, the area has become synonymous with affluence, making the general BT9 area comparable to Dublin 4.

On 25 August 1971 during the Troubles Henry Beggs, a 23-year-old Protestant civilian, was killed by an Irish Republican Army (IRA) bomb placed at the Northern Ireland Electricity Service office on Malone Road. In June 1979 Private Alexander Gore of the Ulster Defence Regiment (UDR), also 23, was killed in an IRA gun attack at the Malone Road army barracks.

The Malone Road army base was closed and sold to private developers in 2003.

The wild plants, "weeds", are listed and discussed in the "Urban Flora" by Beesley and Wilde. They noted that the residents keep their gardens relatively weed-free. In the area Scrophularia nodosa (Common Figwort), Digitalis purpurea (Foxglove) and Silene dioica (Red Campion) were noted in an old lane off the Malone Park. Epipactis helleborine (Broad-leaved Hellborine) was spreading up New Forge Lane and Allium triquetrum (Three-cornered Garlic) was recorded from Cranmore.

All content from Kiddle encyclopedia articles (including the article images and facts) can be freely used under Attribution-ShareAlike license, unless stated otherwise. Cite this article:
Malone Road Facts for Kids. Kiddle Encyclopedia.