Mammaliaformes ("mammal-like") is a clade which contains the mammals and their closest extinct relatives.

Living members of the clade include the monotremes (Monotremata), marsupials (Marsupialia) and the eutherians (Placentalia).

Mammaliforms have highly specialized molar teeth, with cusps and flat regions for grinding food. This is a single inherited system in present mammals, but it seems to have evolved convergently in pre-mammals more than once. Instead of having many teeth that are frequently replaced, mammals have one set of baby teeth and later one set of adult teeth which fit together precisely. This may help to grind food, and make it easier to digest.

Lactation (milk) and fur, along with other features, also characterize the Mammaliaformes, though these traits are difficult to study in the fossil record. The fossilized remains of Castorocauda lutrasimilis are an exception to this.

Fossils of Mesozoic proto-mammals were very scarce. There were only 116 in 1979, but this has changed in recent times. There were about 310 in 2007, with an increase in quality so that there are "at least 18 Mesozoic mammals [with] nearly complete skeletons".

Ecological niches in the Mesozoic

There is still some truth in the "small, nocturnal insectivores" stereotype, but recent finds show that proto-mammals gradually developed a variety of lifestyles. For example: 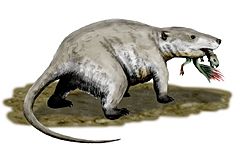 This paints a picture of small-sized mammals being already quite successful and diversified in the Jurassic and early Cretaceous.

In some sources Class Mammalia takes the place of Mammaliaformes, and includes all members of that clade.

All content from Kiddle encyclopedia articles (including the article images and facts) can be freely used under Attribution-ShareAlike license, unless stated otherwise. Cite this article:
Mammaliaformes Facts for Kids. Kiddle Encyclopedia.