Kids Encyclopedia Facts
For the suburb of the same name at the south end of the bridge, see Māngere Bridge, New Zealand. 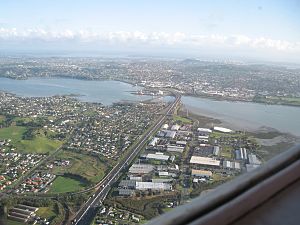 The duplicated Mangere Bridge seen from the south, with the suburb of the same name to the left. 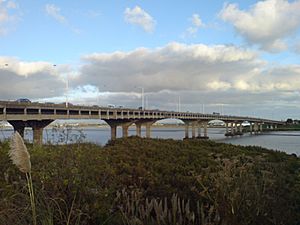 The pre-duplication bridge as seen from the west and north (Onehunga). The new bridge is on the opposite side.

The older portion of the bridge, completed in 1983, carries a four-lane motorway with a cycle and pedestrian path suspended under the western side. By 2000, this bridge was carrying 80,000 vehicles daily and had become prone to congestion.

In 2010, a duplication of the 1983 bridge was opened on its eastern side. This doubled the number of general traffic lanes to eight and provided an additional two for buses, for a total capacity of 10 lanes across the harbour. The project had been delayed by disagreements over design and funding, and over the scope of the bridge project and an associated interchange – with the interchange being scaled down after concerns from the local community.

The initial bridge in this location was built of timber and designed by the Reverend Dr Arthur Guyon Purchas and was opened in January 1875. Rather narrow, it also soon began to be attacked by shipworms, and in 1910, more than 30 of the piles had been replaced, as well as the decking. The bridge was also single-lane, and so narrow, even pedestrians could barely pass a vehicle safely. The bridge was eventually considered structurally unsound and closed in 1914, before being fully demolished.

In January 1914 (1915 in some sources), a 246-metre (807 ft) long replacement bridge was opened. Designed by R.F. Moore, the designer of Grafton Bridge, it was also built by the same company, the Ferro-Concrete Company of Australasia (in a time when almost all bridges in the country were being built by the Public Works Department). This ferro-concrete bridge with driven concrete piles was considered a substantial engineering achievement in its time. With a width of 11.6m, it allowed for a double tram track. The bridge however did not provide for enough clearance to let anything but small boats pass under it. In World War II, an anti-tank road block was erected on the bridge near the middle of the spans, with a small sentry shelter close by. These structures were later removed, and it is unclear whether the bridge had also been mined.

However, the bridge soon proved to have too little capacity, and sinking foundation piles created issues. The bridge was closed in 1983 to motor vehicles and is slowly deteriorating, especially after it sustained damage when a ship accidentally rammed it some years ago. A second ship, the 300 ft container transport Spirit of Resolution, also crashed into the bridge on 8 October 2005 as it attempted to leave a nearby Port of Onehunga berth during winds estimated later as being between 30–40 knots (with stronger gusts) and against a strong incoming tide. The collision occurred despite the ship's bow thrusters working at full power and a small harbour tug assisting.

Due to problems with the quality of the concrete and steel, it was initially envisioned that the bridge would be dismantled and replaced by a newly designed footbridge. Due to complaints about this course of action, plans for its removal were not finalised until 2012. Construction of a replacement structure, designed for walking, cycling and fishing, was scheduled for 2015, the centenary of the opening of the old bridge.

The New Zealand Transport agency is currently constructing a new bridge to replace the Old Mangere Bridge. The new bridge will be built on the same abutments as the previous bridge however it will be built further from the port and allow enough clearance for small boats to pass underneath. The bridge will be at least eight metres wide and up to 12 metres wide in some bays to enable fishing activities. Construction of the replacement bridge is estimated to be complete by 2023.

The older portion of the current Mangere Bridge was opened in 1983, and now carries approximately 80,000 vehicles a day. This motorway bridge took 8 years to build, including a 2½-year stoppage due to industrial action and other delays.

A duplication of the 1983 structure, to increase capacity, was completed in 2010 at a cost of $230 million. It is 650 metres long and provides four southbound lanes (the same number as the 1983 bridge, which was made northbound only), and two (shoulder) bus lanes. One of the lanes is dedicated to local connectivity between Onehunga and the Mangere Bridge suburb only. The total capacity across the harbour is 10 lanes. 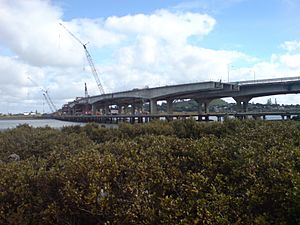 The new bridge being constructed on the eastern side of the existing bridge.

On 17 May 2006, Finance Minister Michael Cullen announced in the Budget that funds were being allocated to Land Transport New Zealand, to help the National Land Transport Programme accelerate certain projects. That included funds for duplication of the 1983 bridge, to its east. The programme indicated that only $2.78 million funding was then approved for investigation of the project, though Transit New Zealand might apply for additional $1.5 million for further investigation of the project. The bridge was at that time expected to cost NZ$330 million.

As a wider part of the Manukau Harbour Crossing Project, the motorway was also to be widened between Walmsley Road in the south and Queenstown Road in the north from four lanes to six lanes. This widening was to predominantly take place to the east of the existing motorway. The Onehunga interchange (known as the Gloucester Park Interchange) was to be significantly reworked, to provide a more logical link with the motorway, and to ease congestion along Onehunga Harbour Drive. A standard diamond interchange was initially chosen by Transit, but after consultation with Auckland City Council this was then reworked into a quarter-diamond design, with the northbound onramp hooking underneath a proposed Neilson Road bridge.

As part of that investigation, Transit considered whether it would have been worthwhile to toll new capacity to assist in funding its construction. This could have been in the form of tolling the new lanes along this route, which would have ensured an untolled alternative was available (as legally required), while the tolled new lanes would be far less congested. In mid 2007, Transit indicated that it would not seek a decision on funding the bridge via road tolls before starting work on construction. Auckland Airport had accused Transit of threatening to defer the project if it could not gain backing from the public and local Councils. As the bridge was to be finished for the 2011 Rugby World Cup, further delays would possibly have resulted in the bridge not being completed in time.

In early 2007 Transit indicated that it would be "more than willing" to develop the duplicate bridge so that it could accommodate a possible future rail link between Auckland City and Auckland Airport, which would be completed by extending the defunct Onehunga Branch line (which was in the funding stages of being reopened for passenger traffic and was in fact reopened on 18 September 2010). The railway currently terminates near the northern end of the bridge. A combination solution was debated which would see a rail link use the same bridge foundations. The change came after repeated lobbying by the Auckland Regional Council, which was of the opinion that Transit's initial proposal to simply reserve space alongside the duplicate bridge for a later, but separate, rail bridge was not acceptable.

In September 2007, Auckland Regional Transport Authority proposed to pledge NZ$2.5 million for future-proofing works to ensure that a rail link would be included. The design envisaged the future railway line run on the new bridge piers for part of the distance underneath the motorway structure, thus saving some of the high costs associated with strengthening the bridge to be able to take a cantilevered bridge – estimated at around NZ$20 million in extra costs.

In July 2007, Auckland City Council commissioners gave approval to widening the approach motorway for the bridge through Onehunga Bay, but opposed the new interchange design north of the bridge favoured by Transit, which intended to construct it around 7 m high over Gloucester Park and the Hopua volcanic tuff ring. The Council's preferred version was to build the interchange at ground level with part of the motorway in a cut and cover tunnel.

The recommendation, which Transit could have ignored only at the risk of drawn-out legal fights at the Environment Court level (which would probably have delayed the project until after the 2011 Rugby World Cup), was based on the concerns of residents, who feared that the new interchange would increase and cement separation of their suburb from the Manukau Harbour. Partly due to this, Transit New Zealand decided in August 2007 to continue with building the new bridge without including a new interchange for the time being.

The bridge has 7 piers with a total of 14 columns, and consists of approximately 10,000 cubic metres of reinforced concrete (with the rebar weighing approximately 1,000 tons). Some of the piles were driven 50m deep, to avoid issues with the softer top layers in the Manukau Harbour. The bridge itself consists of single-pour concrete columns and form traveller-constructed balanced cantilever decks.

The related works also included widening of approximately 4 km of associated motorway to ensure the new bridge capacity would be utilised. Existing pedestrian and cyclist links on the old 1914 bridge closed to motor vehicles were retained and are connected to a shared path along the Mangere Bridge waterfront reserve via a new walking/cycling bridge over Onehunga Harbour Road – linking Onehunga to Mangere Bridge suburb and to the Waikaraka Cycleway.

Construction of the new bridge officially began on 9 April 2008, undertaken by the MHX Alliance, a combination of the NZ Transport Agency, Beca Infrastructure, Fletcher Construction and Higgins Contractors. Completion was followed by a temporary closure of the 1983 bridge for refurbishment works, and the bridge was officially opened on 25 July 2010, seven months ahead of schedule. This brought the number of traffic lanes available over the harbour to 10, 2 of them bus shoulder lanes.

A number of works related to environmental mitigation, post-project landscaping or improvement of non-motorway transport links were associated with the project (and either paid for or undertaken by NZTA). These included a 3.5m wide replacement foot/cycle bridge over Beachcroft Road, a new 3.5m wide foot/cycle bridge over Onehunga Harbour Road at the Old Mangere Bridge, an upgraded underpass under the motorway connecting to Onehunga, as well as improved links to the walking and cycling paths along the harbour and motorway edges and improvement works on the Old Mangere Bridge causeway. After finishing work, NZTA reinstated their large construction staging site along the southern harbour front as an open space, "passive recreation" park with Pohutukawa.

All content from Kiddle encyclopedia articles (including the article images and facts) can be freely used under Attribution-ShareAlike license, unless stated otherwise. Cite this article:
Mangere Bridge (bridges) Facts for Kids. Kiddle Encyclopedia.